Rob Astacio (1-2) is entering the cage for Art of War 7 in just a few days on Friday, May 18 to face Thomas Salmon.  The 2300 Arena in South Philadelphia will host Mike Bickings and his heavy hitting Art of War Cage Fighting fight card. 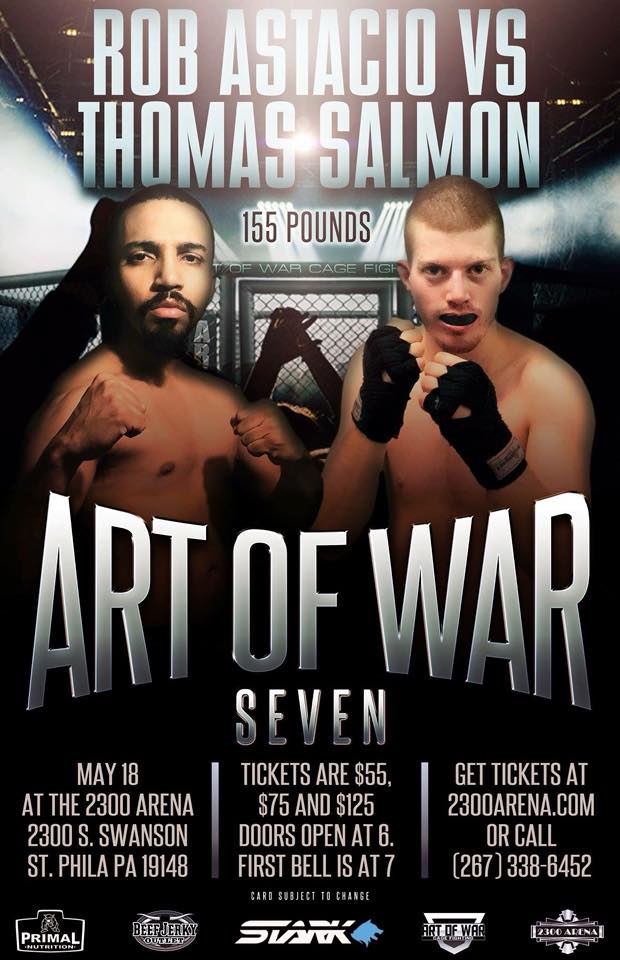 “I’ve learned so much from my first three fights. I’m in the best shape of my life.  I’m ready to rumble. Being in camp with my number one backer, and teammate, Timmy Tyler has also been a big help.  Team Apex will be leaving 2-0 at Art of War!” Rob tells us.

In the past, Astacio was competing at welterweight.  He is now slimmed down and fighting at lightweight and looks to be in peak shape. You can check him out in our video below as I dropped in on him to chat at TKO Fitness of Cherry Hill, where Alexis Barbosa is a calming, encouraging voice for many active combat sports competitors.

Art of War 7 is highlighted by the return of Briarcliffe native,  Sam “Sammy O” Oropeza to the cage after a successful 2-0 dabble into boxing.  He welcomes North Dakota’s Nick Wagner, who has been training in Vegas.  Sam is a local icon in the community.  A husband, a father, a professional career man, a role model, and a crazy good fighter.  The Bellator veteran is 13-3

In the co-main event, Joe “BodyBagz” Pyfer makes his much anticipated pro debut.  BodyBagz is mentored by Oropeza and has been training with legends since he was a youth at Balance Studios. His opponent, Steve Covington may be 0-2, but he’s been the distance twice and been right there.  Pyfer has been finishing his fights pretty quickly.  He has the heaviest hands that I have seen at 185 maybe since I’ve been covering the regional scene.

Timmy Tyler vs Jamal Johnson is another great battle lined up for the night.  MyMMANews will be on hand for live updates and up to the minute results.

WATCH INTERVIEW WITH ROB ASTACIO BELOW: