It was recently announced through an article at MMAJunkie that current Cage Fury Fighting Championships flyweight champion Sean Santella (20-7-1) would meet former UFC fighter Naoki Inoue (11-1) at the upcoming CFFC 72 card on February 16.

While the fight between these top-tier 125-pound combatants is official, what was not immediately known is why Santella would not be defending his title.

When you peel back the onion the reasoning makes sense but since “Shorty Rock” Santella fans were unintentionally left in the dark, questions began to circulate on social media.

MyMMANews has confirmed with a CFFC official that Sean Santella has NOT been stripped of his flyweight title.

Last year the mixed martial arts promotion when on a brief hiatus after parting ways with parent organization, Alliance MMA.  During that time, Santella who was the last fighter to rightfully own the CFFC 125-pound title, signed a three-fight deal with Brave Combat Federation.

Santella has completed one of the three bouts on contract. In August 2018, he dropped a hard fought unanimous decision to Velimurad Alkhasov.  Since then, the promotion has not booked “Shorty Rock” for another bout and because the 34-year old fighter wishes to remain active he asked to fight outside the organization and his contract.

Santella was granted permission to find a fight and tells MyMMANews that he does intend to honor the other two fights on his Brave CF contract when they book him.

Because it is likely that his next bout after the CFFC 72 event will likely be back at Brave and because Inoue has only agreed to a one-fight deal with CFFC, it did not make sense for organization officials to put the CFFC flyweight title up for grabs.

The CFFC promotion which recently signed a deal with the UFC’s digital streaming platform UFC Fight Pass, is widely considered as one of the top-feeder organizations for the UFC.  The promotion’s track record of launching fighters to the UFC’s bigger stage is well documented but one fighter who has been with the organization for an extensive amount of time and never had the opportunity to make that leap is Santella.  There was a brief period there several years ago where Santella was named a replacement for Demetrious Johnson in a fight against Wilson Reis, but the fight never came to fruition.

Since then Santella has been looking to earn his spot on the UFC roster.  Then late last year it became apparent that the UFC might eliminate the 125-pound division from their roles all together as former champion ‘Mighty Mouse’ Johnson was traded to ONE Championship for their former welterweight champion Ben Askren.

With the uncertainty of the UFC flyweight division’s future, where do 125-pound fighters who get to that top level on the regional circuit end up? While CFFC has not expressed any intent to eliminate that division themselves, it would not surprise me if we do not see many fights there at 125-pounds in the near future.  Fighters look to move up, and as previously mentioned, CFFC is well-known for sending fighters to the UFC.  If the UFC does not have a flyweight division in the coming years, why should CFFC?  Again, nothing is official in that aspect and of course fights like this Santella vs. Inoue bout are extremely intriguing and entertaining for the fans, so we shall see where the future takes us.

Inoue has only one blemish throughout his professional career, a split decision loss to Matt Schnell at UFC Fight Night 132 in June 2018. 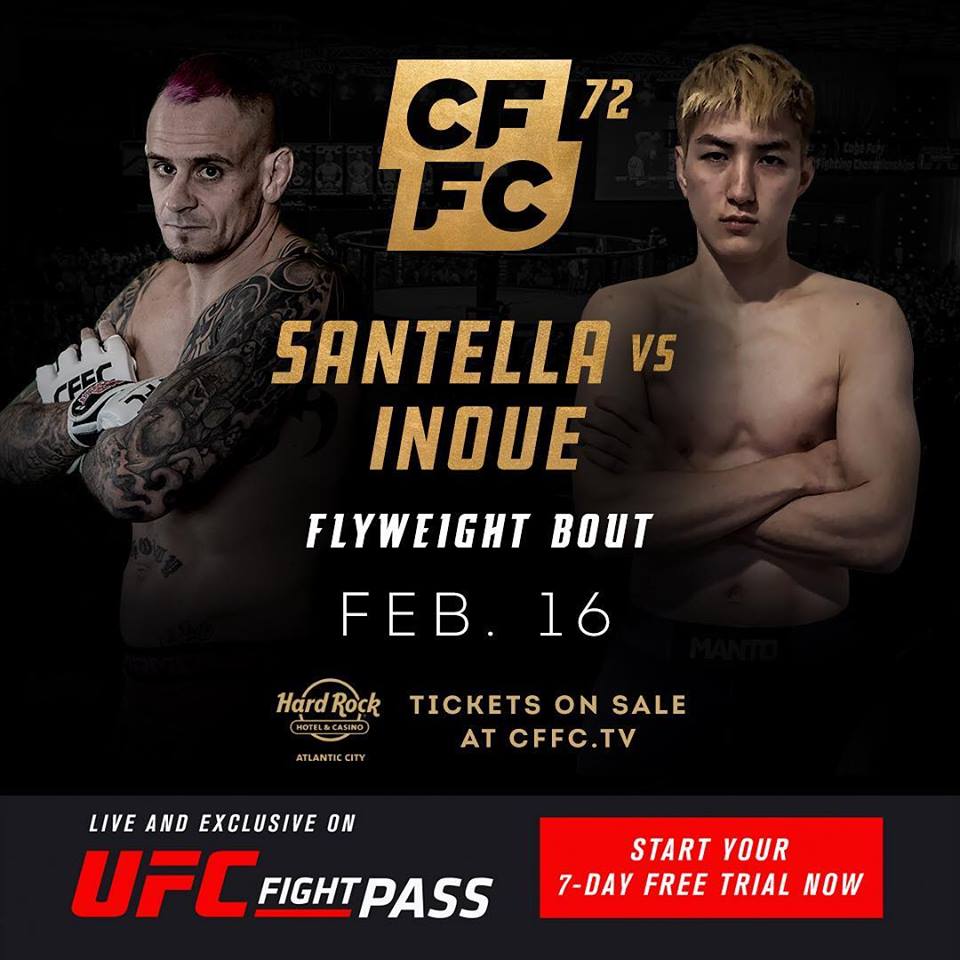 Russ Korbul on Gracie New Jersey fight team: “I feel like we are THE TEAM there at Maverick MMA”

Cynthia Calvillo says she has the best ground game at 125lbs, vows to give Valentina Shevchenko “trouble”

By Drake Riggs 14 hours ago

By Ryan Truland 19 hours ago