We are just one day away from UFC Fight Night 183, also known as UFC Vegas 17, which sees rising contender Geoff Neal taking on former title challenger Stephen “Wonderboy” Thompson in the main event. In the co-main event of the night, we have former featherweight champion and all-time great Jose Aldo taking on another rising contender in Marlon “Chito” Vera. Although not many are talking about this card, it has the potential to be one of the best of the year and is stacked with exciting young talent from top to bottom. Odds wise it is also one of the closest cards of the year with almost every fight being under -200 so this week we are going to look at all the odds and track the line movement to try to get an edge on this week’s picks. 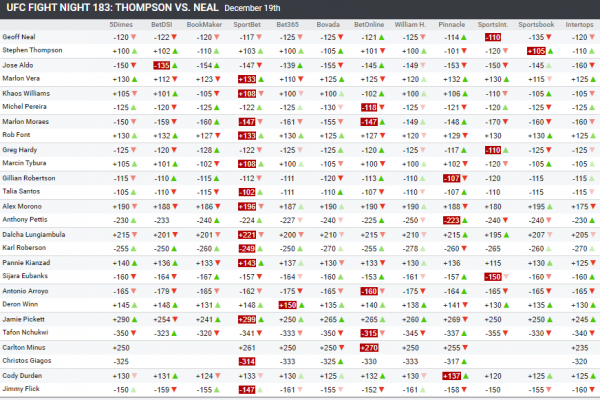 Odds are rarely this close and only four fights are -200 or more with the biggest being Contender Series standout Tafon Nchukwi at -310 and rising. Something that really stood out to me was how much credit some of these younger fighters are getting. Draco Rodriguez is a -190 favorite in his debut, Antonio Arroyo is -165 and rising despite a 0-1 UFC record, Talia Santos is at -105 against a ranked opponent despite a disappointing debut and an unimpressive win this summer, and to top it off the biggest favorite on the card is Tafon Nchukwi who is just 4-0 in his career. Often it’s a good idea to look at things like that and decide if the odds are swayed one way because of recency bias or hype behind a young up and comer. Generally, it’s best to wait and see how these younger fighters develop because a lot of these guys had bad competition outside of the UFC and are now fighting the elite of the elite and won’t be as dominant as they were in the regionals. So as a general rule, wait and see how some of these young prospects look at the highest level before betting them. 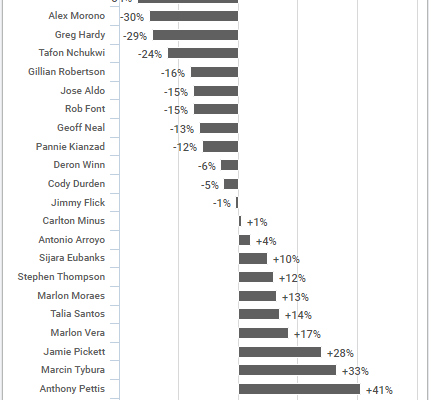 Now let’s look at some of the line movements for these odds. As you can see lots of money is going on Belal Muhammad, Khaos Williams, and Karl Robertson. While Alex Morono, Greg Hardy, and Rick Glenn are also getting a decent amount of money bet on them which is moving the line in their favor. Looking at the bottom of the list we can see some of the fighters the public is fading are Dalcha Lungiambula, Michel Pereira, and Anthony Pettis.

Khaos Willaims opened as a +150 underdog and immediately moved closer to even odds. Although I like Willaims in this one, this line moved so much because of recency bias. Williams has had a crazy year winning his first two fights with the company in less than 30 seconds. But that also means there is still a lot of unknowns about Williams and money is going on him based on just 1 minute of fight time at the highest level. So, don’t be surprised to see Willaims coming back to reality in this one.

The next one I want to look at is Karl Robertson vs. Dalcha Lungiambula. Odds opened with Robertson as a -170 favorite and has now moved all the way to the -250 range. Since so much money was put on Robertson when lines opened, the books were forced to widen his line in fear of big payouts. But that doesn’t necessarily mean Roberts should be a -250 favorite. Money moves lines we all know that. But money moves lines in MMA much more than any other sport.  Often you will see NFL lines where 90% of the public is on one side but the line isn’t moving. That’s because oddsmakers for the NFL are much more confident in their lines while MMA is a newer sport and sportsbooks are less confident in their lines. So, based on nothing but past performances the experts that set the lines had Robertson as a slight favorite but the public thought otherwise. I’m not completely sold on either so this is a no bet for me but sometimes it’s beneficial to look for lines like this and fade the public at better odds than it should be based on skill alone.

Jose Aldo vs. Marlon Vera also had an interesting line move. Aldo opened as just a -125 favorite and quickly moved up to a -150. Aldo is just 3-6 since the McGregor fight but he has also continued to fight the elite of the division and has looked great in a couple of those losses. This is a massive step up in competition for Vera and I was surprised the public wasn’t hammering Aldo at these odds. We know he has dropped off a bit since losing the title but he still gave guys like Volkanovski and Petr Yan tough fights in a losing effort. It will be interesting to see how this moves as we get closer to the fights as I think the public will be betting on Aldo based on name power alone. For me, this is a no bet fight as we don’t know how much Aldo has regressed and we have never seen Vera fight someone at the level Aldo is at.

And lastly, we get to Geoff Neal vs. Wonderboy Thompson. Odds were dead even when they opened but Neal has slowly but surely been bet up to a -130. Again this was surprising to me in the same way Aldo vs. Vera was surprising. Wonderboy is aging and probably won’t be in the title picture again but Neal has never faced someone on the level Wonderboy has been at. Both are coming off over a year layoff and both looked fantastic in their last outings but Neal’s last opponent was Mike Perry while Wonderboy took on Vincente Luque. Going from Mike Perry who is borderline UFC level to a former title challenger and world-class Karateka is a massive jump that I don’t think he is ready for. The smaller cage will help him trap the fleet-footed Thompson, but I think Wonderboy’s mastery of range and evasion has Neal swinging at air all night while eating sidekicks. Similar to the Aldo fight, I think the late money goes on Wonderboy so if you like Neal in this one it’s best to wait it out but if you like Wonderboy I suggest taking him at plus money while you can.

Kevin Wilson is a freelance MMA writer who specializes in pre-fight breakdowns and analysis. He has been an MMA fan since 2007 and has been writing about combat sports since he was 17 years old. His work can be found on Sherdog, MMA Today, and now MyMMANews!