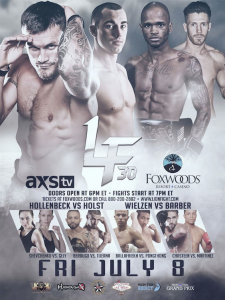 Tickets for Lion Fight 30 are on sale now at www.foxwoods.com or by calling 800-200-2882 or by visiting the Foxwoods Box Offices.

“The roster of fighters assembled for Lion Fight 30 is a great representation of how far our organization is reaching to bring in the very best world-class talent available,” said Scott Kent, CEO & President of Lion Fight Promotions.

“Ky Hollenbeck is one of the biggest names in American Muay Thai, and Sergio Wielzen was a star in Holland who came over to America for the first time and won the Lion Fight lightweight title. Their opponents – Mark Holst and Paul Barber – are elite fighters who know that they have a huge opportunity to showcase themselves so you know they will bring their best to the fight.

“In Antonina and Annabelle, they are unquestionably two of the very best female fighters in the world today, and we are extremely excited to be bolstering our ranks with such exceptional talents.”

In his last outing, Hollenbeck (33-3-1) bullied his way to a second-round knockout victory over Justin Greskiewicz at Lion Fight 28. The San Francisco, California, flashed an array of striking in putting Greskiewicz down with a spinning back fist and then again with an uppercut before finishing him a vicious elbow. Hollenbeck (Twitter: @KyHollenbeck) previously earned a unanimous decision verdict over Richard Abraham at Lion Fight 24, and has won past titles under the WBC and WCK banners.

Holst (19-3), who fights out of Ottawa, Ontario, is known for an aggressive style that has made him a fan favorite. Holst (Twitter: @BootsHolst) is a two-time UFC competitor.

The women’s title fight marks the debut for both Shevchenko (36-1) and Gely (16-2-1), though both are hardly strangers to prominent bouts.

Shevchenko, whose sister Valentina is a rising star in the UFC, joins Lion Fight after winning the 2016 K1 Enfusion Tournament and WKC world championship. Shevchenko (Twitter: @KO_Antonina) is originally from Kyrgyzstan and now lives in Lima, Peru. She is a multi-time IFMA Muay Thai and WKC kickboxing champion.

Gely (Twitter: @mymuyathai) rides a three-fight winning streak into her inaugural Lion Fight encounter, two of those coming with Muay Thai Grand Prix when she defeated Sophie Gallagher and Sofia Teskon. Originally from Grenoble, France, Gely captured the ISKA super featherweight title in 2014, and, earlier in her career, she won the European Muay Thai championship.

Three other bouts round out the Lion Fight 30 main card.

In a welterweight affair, Nick Chasteen (5-2) tries to bounce back from his loss to Chris Mauceri at Lion Fight 28 as he takes on Eddie Martinez (14-5-1). Two super featherweight encounters will open up the card as Morocco-born Amine Ballafriekh (6-2) takes on Kaichon Pongthong (71-33), and Isaac Tijerna (1-0) clashes with Yeison Berdugo (0-2).

By Ashwin 13 hours ago

By Mary Hartman 13 hours ago