KIMBO SLICE TO JOIN THE FIGHT WEEK FESTIVITIES FOR ‘BELLATOR: DYNAMITE 1’ ON SEPT. 19 AT THE SAP CENTER IN SAN JOSE 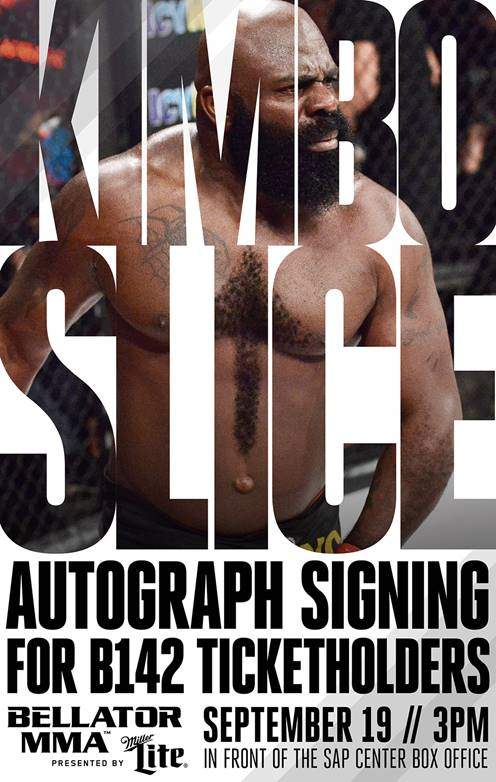 “Bellator MMA: Dynamite 1” ticketholders will now be able to grab a signature from one of the sport’s most recognizable stars in front of the SAP Center Box Office next Saturday at 3 p.m. PT local time, as they enter the arena.  Kimbo Slice, who scored a knockout victory over MMA legend Ken Shamrock in his Bellator debut this past June, will be on site signing autographs and taking photos with fans before taking in the explosive action at the “Dynamite 1” event.

For the first time ever, “Bellator MMA: Dynamite 1” will feature both a Bellator MMA cage and a Glory kickboxing ring on one arena floor at the same time. In the evening’s main event, Tito Ortiz (18-11) will challenge the undefeated Bellator Light Heavyweight World Champion, Liam McGeary (10-0) for the title.

The revolutionary event airs live and free on Spike at 9/8c. Tickets for the historic event start at just $30 and are on sale now at the SAP Center box office and are also available for purchase at Ticketmaster.com, as well as Bellator.com.

On the mixed martial arts side, Bellator MMA will also conduct a four-man, one-night light heavyweight tournament to determine the No. 1 contender in the division that features Phil Davis (13-3) taking on Emanuel Newton (25-8-1) and Linton Vassell (15-4-1) facing Muhammed “King Mo” Lawal (15-4, 1 NC). Newly signed lightweight standout Josh “The Punk” Thomson (20-8, 1 NC) is also in action, when he makes his Bellator MMA debut against Mike “The Greek Assassin” Bronzoulis (18-8-1).

By Monta Wiley 16 hours ago