The UFC comes back to us this weekend at UFC Fight Island 7, as the first show on ABC goes down with former UFC featherweight champion Max Holloway and Calvin Kattar headlining the five-round main event.

This is a truly epic clash between two of the best boxers in the sport, we’re certainly in for a treat with this one. 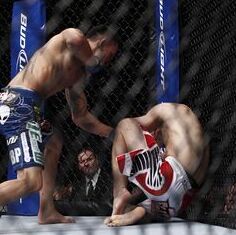 Max Holloway came to the UFC back in 2012 with a record of 4-0. Though three of those four victories came via decision, those four opponents had a combined 94 fights. He was first matched up with Dustin Poirier, filling in for Ricardo Lamas on short notice, and was submitted (triangle armbar) at 3:23 of round one.

Holloway rebounded with three straight victories after this, before dropping his next two to Dennis Bermudez (SD) and Conor McGregor (UD). The Bermudez 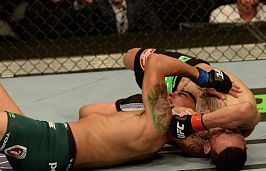 decision was incredibly controversial, but that’s neither here nor there.

The Hawaiian prodigy then went on a legendary streak, winning his next 14 straight. 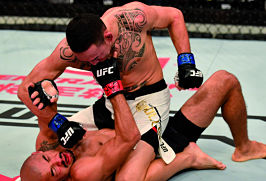 Holloway defeated Pettis via TKO in round three to become the interim UFC featherweight champion, and unified his title, as well as defended it in back-to-back outings against Jose Aldo, who he also TKO’d in round three, twice.

This was followed up by Holloway defending his title for a second time, against undefeated phenom Brian Ortega via TKO at the end of round four. We were seeing one of the greatest fighters of all-time blossom right in front of our eyes. 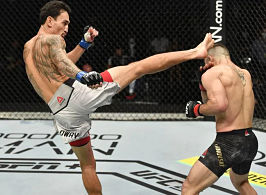 Next came his first bout against Alexander Volkanovski, who he lost to via unanimous decision. It wasn’t a bad performance on his behalf, he just got out-pointed throughout the fight.

Holloway was given an immediate rematch, and while most fans and media believe he won the rematch, he lost it via split decision, bringing his record to 21-6. He’s still the featherweight champion in many people’s eyes. 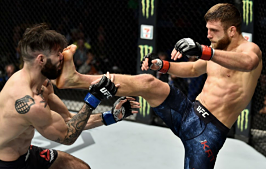 Calvin Kattar came to the UFC in 2017 with a record of 16-2, and immediately picked up a unanimous decision victory over touted veteran Andre Fili. He then met with Shane Burgos at the beginning of 2018, who he TKO’d in round three. He’s still the only man that’s finished Burgos in his career; not even Josh Emmett could finish him after dropping him twice.

Kattar lost a unanimous decision to Renato Moicano in his next fight, before 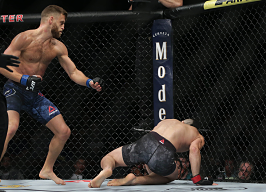 Next came a bout against Zabit Magomedsharipov, who defeated him via unanimous decision. This was a main event fight, and it was changed to 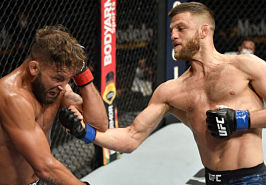 three rounds, rather than five. We weren’t told why either. It wasn’t a short notice fight, and it happened in Russia, where Magomedsharipov is from.

Fans criticize Magomedsharipov regarding his stamina, and maybe that’s why his team campaigned for three rounds. Magomedsharipov won the first and second rounds, but lost the third quite handily. The Russian contender hasn’t fought since, while Kattar’s gone 2-0 in that time.

Those two victories come over Jeremy Stephens via TKO in round two, and Dan Ige via unanimous decision in his last bout. Kattar really showed a lot of heart in that last one against Ige; he got his nose broken by Stephens less than three months prior, and got it rebroken in the Ige fight.

Nonetheless, Kattar pulled through with a dominant victory, improving his record to 22-4. 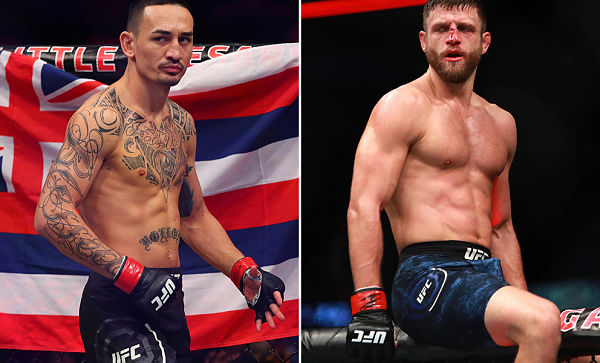 We wouldn’t even be getting this fight if Holloway won his rematch against Volkanovski, he’d be the champion, and Kattar isn’t the No. 1 contender.

He doesn’t stay in the pocket and let his opponents hit him, he uses his incredible footwork to slide out of danger, but he throws more hooks, overhands, and uppercuts, while Holloway generally uses more straight punches.

There are two things to consider when predicting how this fight will go:

For one, Holloway has gone 1-3 in his last four after opening his career up with a record of 20-3. Normally when that happens, the rest of their career doesn’t exactly go the way they want it to. Kattar on the other hand has been looking better than ever.

For two, Kattar’s got a very similar style to Dustin Poirier, who Holloway just lost to in 2019. He plants his feet and throws heavy punches, and he’s very good at it. Poirier’s also one of the better boxers this sport has seen, which aided him in defeating Holloway for the second time.

If Holloway can’t keep his range, this fight may not go very well for him. The problem with him keeping range is, well, he has t-rex arms. They’re both 5’11”, but Holloway’s reach is just 69”, while Kattar’s reach is 72”.

We thought Holloway would keep improving for years and years to come, he’s still only 29-years-old, having turned 29 just one month ago. Kattar is 32-years-old, turning 33 in March.

This is an incredible main event to our first fight night of 2021! Does the former champion reign supreme, or does the older contender continue climbing further up the rankings?