Fresh off his unanimous decision win over John Dodson at UFC 191 on Saturday, UFC flyweight champion Demetrious Johnson has moved up one spot on the pound-for-pound best fighter rankings. 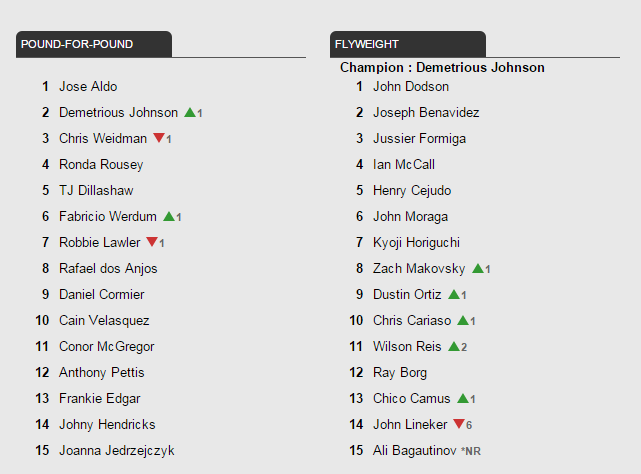 ‘Mighty Mouse’ moved from number three to the number two spot just behind UFC featherweight champion Jose Aldo.  Dodson remains as the number one seed in the UFC flyweight division behind Johnson.

Also, Paige VanZant moved up from the number seven to six spot in the UFC women’s strawweight division after her armbar submission victory over Alex Chambers.

Rankings are generated by a voting panel made up of media members. The media members are asked to vote for who they feel are the top fighters in the UFC by weight-class and pound-for-pound. A fighter is only eligible to be voted on if they are in active status in the UFC. A fighter can appear in more than one weight division at a time. The champion and interim champion are considered to be in the top positions of their respective divisions and therefore are not eligible for voting by weight-class. However, the champions can be voted on for the pound-for-pound rankings. Rankings aree updated approximately 36 hours after each event.