We have a very exciting headliner to look forward to this weekend, as top welterweight talents Stephen ‘Wonderboy’ Thompson and Geoff ‘Handz of Steel’ Neal go at it in the five-round main event at UFC Vegas 17.

It’s too bad Leon Edwards caught Covid-19 and was unable to make the walk against Khamzat Chimaev. They rebooked that bout for next month however, and now we get to see two welterweight assassins battle it out. 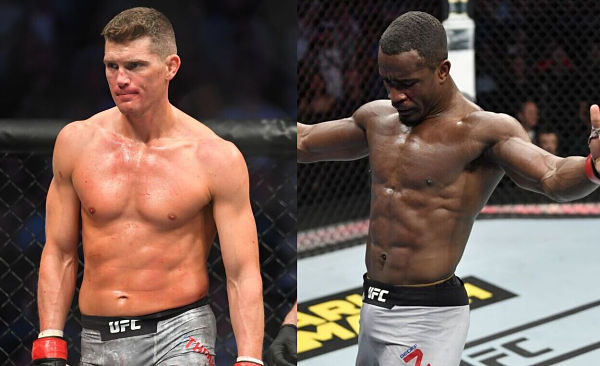 Stephen Thompson has been in the UFC for some time now, since February of 2012 to be exact, UFC 143, the night Nick Diaz fought Carlos Condit for the interim UFC Welterweight Championship. 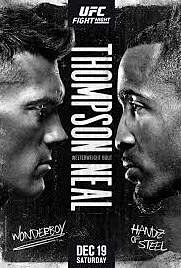 ‘Wonderboy’ has since fought for the undisputed belt twice, and he’s one of the top five best strikers in mixed martial arts today. He got his start in karate, where he holds a 5th-degree black belt in Tetsushin-ryū. Thompson has since achieved a black belt in American Kickboxing, and he boasts a 57-0 record in kickboxing (20-0 as a professional, 37-0 as an amateur).

To this day, he’s only really lost one stand up fight, where he was KO’d by Anthony Pettis at the end of round two, a fight he was dominating the entirety of.

He lost the second Tyron Woodley fight, which was almost entirely played out on the feet, and he lost the Darren Till decision, which was quite disputed by some. Even losing to Till, he went 44-0 in Muay Thai, there’s really no shame in it.

Nonetheless, Thompson’s only truly lost one fight, two fights at the most that were contested entirely on the feet. After securing a Knockout of the Night bonus in his UFC debut with that beautiful head kick KO, Thompson lost his next fight to Matt Brown.

‘Wonderboy’ was just out-classed in that fight by the more experienced opponent, he was only 6-0 himself at the time.

Thompson then battled then champion Tyron Woodley to a draw in an epic fight for the ages. This led to their rematch, and their second pairing was actually one of the more boring fights in UFC history.

‘Wonderboy’ rebounded from this by defeating Jorge Masvidal via unanimous decision. He looked incredible in this fight, he handily out-struck Masvidal, and even knocked him down a couple times.

Then came the back-to-back defeats to Darren Till and Anthony Pettis, before his most recent bout against Vicente Luque, who he also out-struck to a unanimous decision victory.

We knew ‘Wonderboy’ was as skilled and as talented as anyone, but we did not know if he still had it. He showed us he does, and this fight is very similar to his with Luque. Neal’s a little quicker and he doesn’t throw as traditional of strikes as Luque, but this is a different fight nonetheless.

Geoff Neal came to the UFC in February of 2018, exactly six years after Thompson, after his TKO victory on the Contender Series. He made quick work of his first two opponents, submitting (rear naked choke) Brian Camozzi and KO’ing Frank Camacho with a nasty head kick.

Next, Neal defeated Belal Muhammad via unanimous decision, before finishing Niko Price and Mike Perry, both via TKO. That Perry win really showed us how dangerous this man is, no one had ever done that to Perry, he’s as tough as they come. Neal stormed right through him in 90 seconds.

He inflicted so much damage on Perry in those 90 seconds, that Perry’s ex-girlfriend said he kept saying he was next up after they went backstage following the fight.

Perry didn’t understand he already fought, and he didn’t let it go for hours until security and his coaches were finally like, ‘hey, you already went out, you lost.’

Apparently he finally understood after they left, but man, it’s kind of sad. That makes this fight very interesting, because as you see, ‘Wonderboy’ has been finished once via strikes.

Thompson also has a 1st-degree black belt in Japanese JuJitsu, and a brown belt in Brazilian Jiu-Jitsu, while Neal holds a blue belt in BJJ.

It’s doubtful this fight hits the mat though, unless one of them hurts the other, which is entirely possible.

Again, it’s too bad we’re not getting Leon Edwards versus Khamzat Chimaev in the main event, but now we get to see these two go at it for five rounds, should they be able to survive one another.

Who do you see winning this epic welterweight main event at UFC Vegas 17, Stephen Thompson or Geoff Neal?

By Eric Kowal 38 mins ago