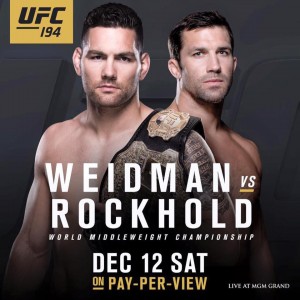 Each and every time we think the UFC has put together the best fight card of the year they manage to pull another rabbit out of a hat.

Another highly-anticipated world championship fight is on its way to Las Vegas on Saturday, December 12, as UFC middleweight champ Chris Weidman defends his title for the fourth time against number one contender Luke Rockhold in the co-main event of UFC 194 at the MGM Grand Garden Arena.

UFC 194 is headlined by the long-awaited featherweight title bout between Jose Aldo and Conor McGregor.

McGregor currently holds the UFC interim featherweight title and this bout with Aldo will solidify the championship.