‘The Sandman’ Cory Sandhagen just picked up the biggest win of his professional career this past weekend at UFC Vegas 5, as he finished the No. 1 UFC bantamweight contender Marlon Moraes in round two of their main event bout. 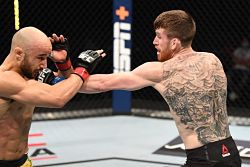 Sandhagen has always looked like the next big thing ever since we first saw him compete, but this was surely Cory Sandhagen 2.o.

He looked great from the start of the fight, all the way up until the finish, and against one of the pound-for-pound most dangerous fighters on the planet.

Moraes is nothing short of spectacular, he’s as well rounded and dangerous as they come. The Muay Thai he possesses, along with his power, and his world class BJJ, which he has a black belt in under Ricardo Almeida, it’s a lot to handle for anyone.

However, having that much power comes at a cost, and that cost is his small frame, as well as a lack of world class endurance. Moraes isn’t the type of fighter that can’t go five rounds, he has, two of his WSOF title defenses went five rounds. All three judges scored the first one 50-44 for him, and all three judges scored the other 49-46 for him. 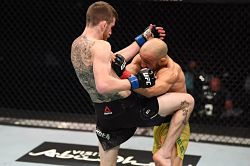 When going against the elite of the elite however, it seems like Moraes needs to get an early finish, or he’ll just be out-paced, and eventually finished. He didn’t have a chance to really get going in this fight, Sandhagen didn’t allow him to.

Not only is Sandhagen the much longer party of the two, but he knows how to use that length, something that’s very important in this sport. He’s as durable as they come as well, which helps a good amount.

Moraes landed a total of 14 strikes, none of which fazed Sandhagen, and Sandhagen landed a total of 38 strikes, which led up to his beautiful spinning wheel kick finish, ultimately awarding him the TKO victory at 1:03 of round two, improving his professional record to 13-2.

‘The Sandman’ was coming off his first promotional setback coming into this fight, where he very quickly had his back taken and was almost immediately submitted (rear naked choke) by Aljamain Sterling. That fight only lasted 88 seconds, but thankfully, we got to see a lot more from Sandhagen on Saturday. 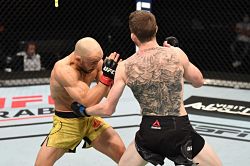 Most of us couldn’t figure out who to pick in that fight. We were upset it wasn’t five rounds, considering it was a clear No. 1 contender fight, and we all expected it to be a competitive fight with each man having success throughout.

Sandhagen didn’t let that discourage him though, as he came out and did his thing by finishing a six-time world champion. Moraes, like Sandhagen, is also a kickboxing champion, making the TKO finish that much more impressive.

Now that he just finished the No. 1 UFC bantamweight contender in the world, what’s next for Cory Sandhagen? You’d think the only way to go for him is up, but that’s a fight with UFC Bantamweight Champion Petr Yan.

It’s actually a good thing that Moraes versus Sandhagen went the way it did, because if Moraes won, Sterling may have been passed up for a title shot yet again. 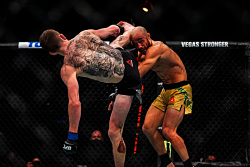 He deserved a title fight when Dominick Cruz got the shot, he deserved it when Petr Yan and Jose Aldo fought for the vacant belt, and now that he ran right through Sandhagen, he’s undoubtedly next in line.

Sandhagen winning almost ensures Sterling’s chances of being next, because Sterling’s last defeat is to Moraes. So really, Sterling was the biggest winner after UFC Fight Island 5 was all said and done, Sandhagen’s win made him look like a straight killer.

Now that we know Sterling won’t be passed up, or at least think we know, we’ll have to figure out who Sandhagen can fight in the meantime. Luckily, 135 lbs is one of the most stacked divisions in all of MMA, especially the UFC’s bantamweight division.

A fight that’d be really fun to see him in is against Cody Garbrandt, though it’s highly unlikely that’ll be next for him. Garbrandt just picked up his first win since December of 2016 this past June, where he KO’d Raphael Assuncao in the last second of round two. 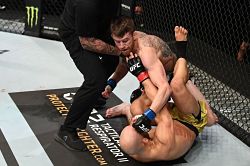 This is unlikely because for one, Garbrandt isn’t healthy, he tore his bicep, and he had to pull out of his scheduled UFC 255 main event bout considering. Secondly, that scheduled bout was against UFC Flyweight Champion Deiveson Figueiredo at 125 lbs.

Aside from him, the only fight Sandhagen could take that’d make the slightest amount of sense would be former UFC Lightweight Champion and three-time featherweight title challenger Frankie Edgar, who’s coming off a five-round split decision victory over Pedro Munhoz.

Many people believed Munhoz won that fight, even 17 of the 20 media members that scored the fight scored it for Munhoz. However, most didn’t cry robbery, it was a very close fight. Munhoz is now coming off back-to-back setbacks, so Sandhagen facing him doesn’t make a great deal of sense. 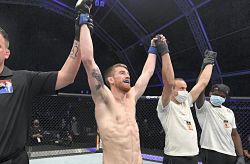 Honestly, ‘The Sandman’ may just end up having to wait his turn after Yan and Sterling go at it, but that fight hasn’t even been signed yet. Who knows when it will be, the UFC has really been taking its time putting those two together.

A fight with former WEC and UFC Bantamweight Champion Dominick Cruz would be incredible to see, even though Cruz is ranked at No. 10.

We’ve only seen Cruz fight once in nearly four years, though he’s proven to us before that doesn’t make a difference in how he fights.

These two are very similar in styles. Both have great striking, they both switch stances while striking, though Sandhagen probably has an edge in volume. The same could be said for Cruz however, who has an advantage in the wrestling department.

‘The Sandman’ is kind of like a newer, slightly more evolved version of Cruz, similar to TJ Dillashaw. Speaking of TJ Dillashaw, he’ll be eligible to fight again come January. The UFC could make Yan versus Sterling for late 2020 or early 2021, and maybe have a No. 1 contender fight between the supposed No. 2 contender and the former champion.

That’s a solid plan. Dillashaw never lost his belt in a fight, and Sandhagen’s right there, but really does need one more impressive performance before challenging for the title, strictly because of how his fight with Sterling went. Whoever and whenever it is, we’ll all surely be tuning in.

What’s next for Cory ‘The Sandman’ Sandhagen?