This was a huge win for Gane, an absolutely massive one. For starters, he came into the fight with a 6-0 record, while the former champion was 21-8. It doesn’t matter if dos Santos was coming off three straight knockout defeats or not, he’s still one of the best boxers in the sport, and he’s still a very dangerous man. 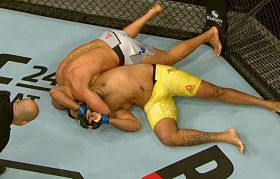 Gane proved experience doesn’t mean anything to him, as he’s done before, but this was really his coming out party. In his fights previous, he submitted (arm-triangle choke) Raphael Pessoa (9-0) at 4:12 of round one, a fight he came into with a record of 3-0.

Gane then of course defeated dos Santos via TKO at 2:34 of round two after an incredible seven-plus minute showcase. He fought the whole fight in kicking range, throwing a variety of kicks at a variety of different speeds, up until he switched up the range on dos Santos and came in with a nasty elbow, resulting in the beginning of the end. 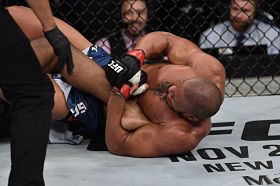 Gane also won the TKO Heavyweight Championship in his first professional bout, and defended it twice before coming over to the UFC. How often do we see the UFC sign talents with a 3-0 record? That speaks to the level of Gane.

This stems from his kickboxing background, where he went 13-0 as a professional. There were extremely high hopes of him becoming the best heavyweight in the world in the sport of kickboxing, but he decided to cut that career short and focus on mixed martial arts instead.

It’s surprising it took over a year, four fights, to see Gane secure his first promotional knockout victory. His ground game is quite a bit better than any of us expected. After going 4-0 inside the octagon, what’s next for Ciryl Gane? 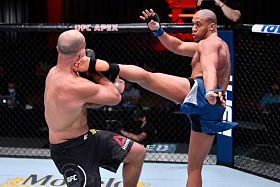 Well, firstly, he jumped right into the middle of the rankings with this victory, up seven spots, climbing to No. 7. This is quite a drastic jump, but hey, he just finished one of the best heavyweights to ever do it.

The winner of No. 5 ranked Alistair Overeem and No. 6 ranked Alexander Volkov would be a stellar match up. Literally, either of them would be perfect. They’re both incredible strikers, like Gane, and Overeem is a kickboxing world champion, like Gane.

Overeem has just about every accomplishment this sport has to offer, aside from winning the UFC Heavyweight Championship, and he nearly did capture it. He nearly knocked Stipe Miocic out, and he also nearly submitted him. 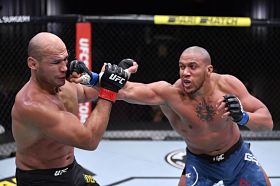 Nonetheless, he’s won the DREAM and Strikeforce heavyweight titles, and he won the K-1 2010 world gran prix, as well as coming in third place the year prior. Volkov is the former heavyweight champion of both Bellator and M-1 Global, and he has some of the best boxing slash kickboxing in the heavyweight division.

Both of them would make a perfect match up for Gane. They’re both far more experienced, Volkov being 32-8, and Overeem being 47-18 (1 NC), but Gane’s shown in his last two fights, it doesn’t matter. If he’s facing a striker, like these two are, he has great chances of winning that fight.

Aside from the winner of that fight, a bout against No. 4 ranked Derrick Lewis would be loads of fun to watch. Lewis has perhaps the hardest punch in this sport, behind Francis Ngannou, and he’s been taking the sport seriously lately, unlike before.

Before, Lewis didn’t train the way he was supposed to, he didn’t take the sport as seriously as he could’ve. Luckily, he’s an incredible athlete, and is able to add new skills to his arsenal in his mid-30’s.

He used to throw nothing but punches, and occasional head kicks that we all knew wouldn’t land.

Now Lewis is throwing head kicks that look like they’ve been practiced repeatedly, now he’s throwing flying knees, and they’re absolutely vicious. He still has all that power he used to as well, he’s more dangerous than ever, and he’s still nearly five times more experienced than Gane, at 24-7 (1 NC).

A fight with No. 3 ranked Jairzinho Rozenstruik would also be an incredible fight to see, but that can wait until Ciryl Gane gets one more win under his belt. That’s really the fight to wait for, because Rozenstruik is a 76-8-1 professional kickboxing champion, and is 11-1 in mixed martial arts with ten knockouts.

Like previously stated, that one should wait until they’ve each fought at least once more. Who would you like to see him fight?