Current Cage Fury Fight Championships (CFFC) heavyweight champion, Zu Anyanwu, will step away from the cage, October 24, however the move is not permanent.

The champ posted on Facebook: “Stepped away from the grappling circuit years ago to pursue MMA. Right now Im at the top of my game in MMA. Soon to be picked up by Bellator or the UFC. Decided to step back on the mats one more time against World Class Grappler Tom DeBlass. We both come to win and hate to lose. I’m coming in as the underdog and looking to leave as the Top Dog….Also, I will be defending my CFFC Heavyweight Title in Philly Dec 4, 2015. But first things first!!! Game On?#Oct24#groundhog #freeZu #superfight #submissiongrappling#jiujitsu #NJ “

DeBlass, a Ricardo Almeida BJJ black belt, retired from mixed martial arts in 2014 to devote more time to his craft of jiu-jitsu and focus efforts on his school, Ocean County Brazilian-Jiu Jitsu.  He is a UFC, Bellator and Ring of Combat Veteran.

Anyanwu lost the CFFC heavyweight title last November to Plinio Cruz via unanimous decision, only to bounce back with a win over Lewis Rumsey, followed by a Split Decision victory in a rematch against Cruz in July.

DeBlass also took to Facebook to post the below flyer stating “I’ll be competing in a super fight grappling match close to home October 24th against Cage Fury MMA heavyweight champion and top MMA prospect Zu Anyanwu. HUGE props to Zu for stepping out of his comfort zone to compete in this Grappling match! OCBJJ students lets get out and compete in this. It’s the perfect tournament to test yourself while having fun. Just look how happy I am in the poster! Haha.” 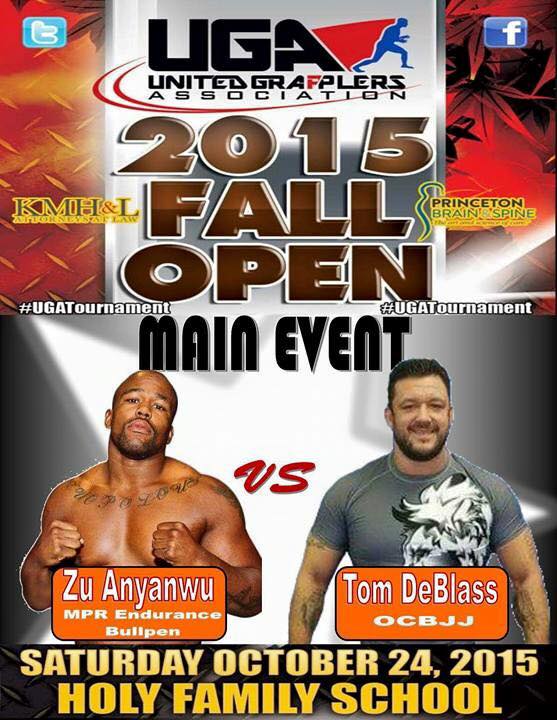