His work inside the JacksonWink Academy has spoken so loudly that less than a year into training, Davion Franklin will make his professional debut at Bellator 233.

Franklin will face Christian Edwards on the preliminary portion of the card taking place at the Windstar World Casino in Thackerville, Oklahoma.

When did you start training? Tell me your background.

“Earlier this year as far as mixed martial arts.  I’ve been a lifelong wrestler. I’ve been wrestling since I was ten years old. I wrestled in high school, third in the nation my senior year, national qualifier my freshman year of college. Yeah, just been a grind, honestly.”

What have you shown here in the gym to where you’re bypassing the amateurs and jumping right into the professional ranks?

What has it been like transitioning to martial arts; striking, submissions?

“Natural, natural; It hasn’t been hard. There are some things I still gotta clean up, but for the most part its just come naturally. It’s just god, god’s work. Honestly, it’s how I feel. In my humble opinion I feel this is god’s work.”

How do you describe getting an opportunity with Bellator right out of the gate and how do you cash in on this opportunity?

“I surprised myself, that’s what it feels like. I told myself I’m not going to sign to Bellator or UFC til’ I’m like two, three, years in. I was prepared to go through the amateur circuit and take the process everybody else takes. The universe works in mysterious ways. It just worked out I got signed to Bellator in seven months of training. Beat the f**k out of the guy! I’m sorry. Hey man, breaking necks and cashing checks, make a statement; that’s it. That’s my mentality.” 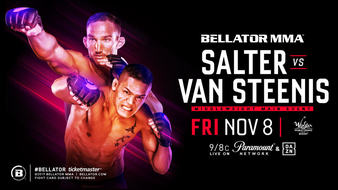