Former longtime UFC featherweight king Jose Aldo is still quite evidently one of the best fighters on planet earth to this day, and it’s very exciting to see.

Many of us were thinking the former champions best days were behind him, and while that’s certainly true, he can still defeat some of the best fighters in the world today. 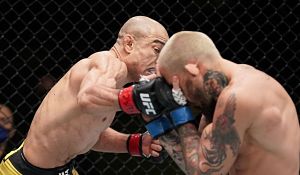 Luckily, the judges didn’t ruin any fights on Saturday, all the decisions that night were scored just how they should’ve been.

Vera had just come off his first-round stoppage (TKO) victory over the undefeated Sean O’Malley, and aside from his awfully controversial unanimous decision defeat to Song Yadong, he’d finished his five fights prior. More or less, ‘Chito’ was on a seven-fight win streak win six finishes.

This marked Aldo’s first victory in the bantamweight division, well, the first official victory, and his third bout at 135 lbs. He fought Marlon Moraes in his bantamweight debut, but lost a very controversial split decision (29-28, 28-29, 29-28). 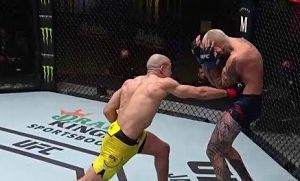 Moraes has now been finished via TKO in three of his last four outings, the only victory in that time coming over Aldo, and no one believes he deserved that win.

Aldo still got the title shot regardless, because like mentioned above, no one thought he lost that fight, and he was fighting Petr Yan for the vacant strap at UFC 251, after Henry Cejudo vacated it.

Aldo looked incredible early on, we were seeing the Jose Aldo of old; the one that was dangerous and went for it, the one that threw and landed nasty leg kicks, it was him. It wasn’t the boxer version of Aldo that showed up that night, and it was great to witness.

You see, Aldo got away from those vicious leg kicks after his second Chad Mendes fight. He threw some in the Max Holloway rematch, but other than that, he’d turned into a boxer, a damn good one at that, but he still wasn’t as dangerous as he used to be. 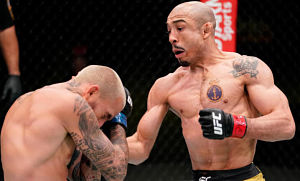 We saw him start to use them again against Yan, and it forced Yan to switch his stance for a good portion of their fight. Aldo got tired in round four however, and was finished via TKO in round five.

When Aldo fought Moraes a year ago, he didn’t do much throughout the fight, because he was conserving his energy. He wanted to see how much stamina he had at the end in a new weight class, and his cardio looked great that night.

The five round fights however are still his kryptonite, as they always were. Don’t get it mixed, he always won those decisions, but he’d often times lose round five because of his endurance. We thought maybe moving to 135 lbs would help him with that, being forced to switch up his diet and eat real food, but it didn’t unfortunately.

If that fight were three rounds, Aldo would have won the 29-28, or maybe even the 30-27 unanimous decision, if the judges did their jobs correctly of course. But it wasn’t three rounds, it was a five round title fight. 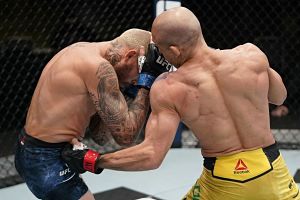 Nonetheless, after taking all that damage, especially in round five, he came back just five months later to take on top 15 ranked bantamweight Marlon Vera. ‘Chito’ may be on the lower side of the top 15 rankings, but this kid can do it all, and he’s as dangerous as they come.

His Muay Thai is beautiful, he doesn’t take steps backward, ever, only forward, and he’s a black belt in Brazilian Jiu-Jitsu.

Aldo was able to take the first round from him with his beautiful shovel hooks to the body, jabs, crosses, and hooks to the head, and you guessed it, his leg kicks. It’s great seeing Aldo bring those back, it’s a wonder why he ever stopped using them.

Round two was close, the judges all gave it to Vera, and Aldo held Vera’s back for four-plus minutes of round three, awarding him the unanimous decision victory. It was incredibly impressive because no one’s done that to Vera before, and we finally got to see some of Aldo’s ground game.

The former champion is a 1st-degree black belt in Brazilian Jiu-Jitsu, and he has one single victory via submission (arm-triangle choke), his third professional fight in 2005. 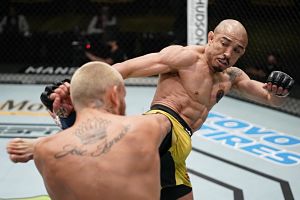 We got to see a little bit of his grappling when he defended his title against Chan Sung Jung, and when he won the title against Mike Brown, but aside from that, all we’ve seen of him is his devastating striking.

Aldo certainly isn’t at his best anymore, all of his fights are competitive now. He never used to have competitive fights, literally never.

The only competitive fights he had prior to losing his title were the first fight with Frankie Edgar, and the second fight with Chad Mendes, and he still got all three judges scorecards in those two bouts.

He KO’d Mendes in their first fight, and absolutely dominated Edgar the second time around, when Edgar was on a real hot streak coming in.

The Rio native does however still have what it takes to win big fights, just give him three rounders. A three round Jose Aldo is a dangerous man, just ask Jeremy Stephens or Renato Moicano. 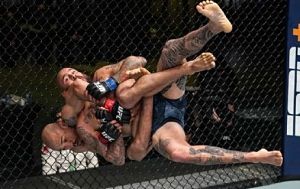 Aldo may not ever be champion again, at least not in the UFC, but he can still put on some great performances for us. Really, he should be 2-1 at 135 lbs, rather than 1-2, and considering he brought his leg kicks back, he’s almost a new fighter again.

Now that everyone’s been targeting the calf kick lately, if Aldo could switch it up and kick the calf of his opponents, rather than their thigh, he’d have that much more success, and it’d be hard to see anyone beating him, should he make that career adjustment.

At his best, Aldo had a record of 25-1. He was undefeated for ten years, and racked up a total of nine title defenses between the WEC & UFC, with a record of 10-0 in world title fights.

He’s now 29-7, though he should be 30-6, and he didn’t look better than ever against ‘Chito’, but he did look great against one of the best, hungriest fighters in the world. Vera is one of the most dangerous talents out there, and Aldo was able to get the better of him, a fight many counted Aldo out of. 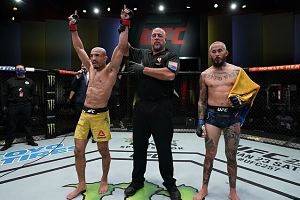 It’ll be interesting seeing what the UFC does next with him. After his fight with Vera, Aldo called out former multiple-time UFC Bantamweight Champion TJ Dillashaw, who will be eligible to compete in just one month. His suspension is finally almost up!

Not only the stats and their careers, but the conflicting contrast of styles in that fight would be insane.

We almost got to see Jose Aldo versus Dominick Cruz at UFC 207, but it didn’t end up happening. This would be a pretty similar fight, only Dillashaw is a far more dangerous opponent than Cruz. Is this the next fight we end up seeing for these two?

Jose Aldo is Still One of The Best Fighters on The Planet!

By Bjorn Morfin 2 days ago