Kayla Harrison has been making the news rounds lately with the start of the PFL’s third season. Harrison is the two time champion for the promotion and is looking for a three-peat this season with another championship and another check. Recently, however, Harrison went on the Helwani Show saying she’s not chasing anything but legacy. The two time Olympic gold medalist is one of the hottest commodities in terms of future prospects in the sport. But, with her goals of legacy, the PFL might have a hard time keeping the two, possibly three time, champion.

If I’m Kayla Harrison’s management, which I’m not, I would have a different career path than most others would have for Harrison. The main fans want Harrison in the UFC and for her to face incumbent champion, Amanda Nunes. But there is another way to build the legacy of Harrison…

But, the appeal of a lot of belts comes in the photo ops. Take a look at this photo: 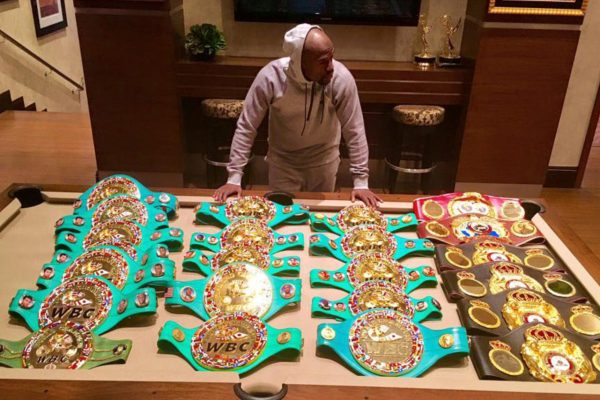 Floyd Mayweather looks like an undisputed champion. Regardless of how you feel about his opponent selection, Mayweather has the trophy collection that very few can rival. This is the angle Kayla Harrison should take in her career. 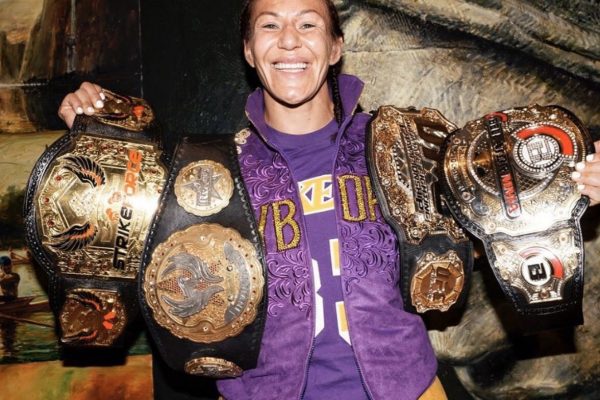 Even the current Bellator champion, Cris Cyborg, has recently adopted this approach after winning the Bellator championship. Cyborg posed with her Strikeforce, Invicta, UFC and Bellator belts. But this is a late career tactic and Kayla Harrison can make the belts her career identity.

After winning the gold medal in the Olympics, Henry Cejudo claimed two belts in the UFC and crowned himself Triple C. Cejudo’s approach is more of what I can envision for Harrison. So what is there right career path for the Olympian-Champion?

At 9-0, Harrison is already very accomplished and very wealthy. With at least $2 million banked from winning two PLF championships, she’s set and can put all her time and resources into the legacy department. Harrison has already competed in Invicta and I think that’s her next move, albeit a short one. With her win over Courtney King at Invicta FC 43, there is a case for her to get a shot at the featherweight title against the current champion, Pam Sorenson. That one off fight might hurt Invicta but would help Harrison. After capturing two belts, PFL and Invicta, Harrison can tout her two belts and two gold medals.

Then there is Bellator. She moves over to the second biggest promotion in the USA and build her legacy there. She will be in the 14-0 ballpark if things go according to plan. She can either take on Cyborg, if she’s still champion, or take a number one contender fight. Then, the trickery comes.

Bellator is keen on cross promotional fights with RIZIN. RIZIN doesn’t currently have a women’s featherweight division or champion, but that doesn’t mean they can’t cobble one together and do a Grand Prix for a belt, they do that all the time. Say Kayla Harrison wins that as well while representing Bellator, two more fights. After the Bellator stint, her time is up. She’s collected the PFL belt, Invicta, Bellator, and a RIZIN Grand Prix strap.

Finally, the UFC. It’s 2024ish in this timeline and Harrison is 17-0 at the minimum. Nunes might be retired, sure, but the belt is still up for grabs. It’s up to Harrison to make the history from there.

Many think a great legacy is winning a UFC title and defending a title is the end all, be all for a great MMA fighter. But with Cejudo’s accomplishments and MMA going the way of boxing, that is all changing. The sport is more keen on crossover fights and Eddie Alvarez recently had an unsuccessful stint trying to capture the ONE Championship belt. But, the precedence for the idea is there. Harrison going on a promotional tour, grabbing every championship possible is the future of the sport, like it or not.

Kayla Harrison going out and winning every belt, making it her career identity, pushing the point and really driving it home that she plans to dominate the world of MMA in every way possible. The gamble is Amanda Nunes sticking around long enough. Should she go to the UFC, Harrison risks it being too early for the fight. Too late and Harrison will be in the shadow of champ-champ Nunes for her whole career. But should she go on a world tour and dominate everywhere, with or without Nunes, she has the best case for greatest women’s fighter, and possible best combat sport fighter of all time. It’s not a traditional legacy that fans are used to, but it is an evolutionary one in the sport of mixed martial arts.

Of course, Harrison could just resign with the PFL and dominate there, winning a million dollars a year, year in and year out, and become filthy stinking rich.