Nate Jennerman faces Ken Beverley in a featherweight contest at LFA 61. The Roufusport fighter talks about finding his joy for MMA again after being in too much of a rush and losing it his last few fights.

Where do you find yourself now that you are coming off a loss to Damon Jackson at LFA 47 in a Featherweight title bout that ended a three-fight win streaklf?

“Ready to get back in there. Obviously, last fight didn’t go my way. I took some time off. I reset myself. I was at a bad spot mentally. I wasn’t having fun in my fights. I was too focused on what was next, instead of actually enjoying the moment. Me and Duke (Roufus) talked about it a lot. I’m excited for this fight I’m ready to have some fun, get back in there, and get back to finishing people.”

What do you think of your opponent Ken Beverly and what will make the difference in this fight?

“I think it’s a great match-up. I think its an exciting match-up for people to watch. He’s eight and three, very well-rounded. I’ve watched two to three of his fights. He looks very well-rounded, but he makes a lot of mistakes that I can capitalize on. He’s good at what he does. I think he’s more of a grinder though and I’m a straight finisher. He’s got eight wins, five are by decision. I got twelve wins, ten are by submission. I’m always looking to finish the fight. I’m going out there with way more of a killer mentality then I been having. I’m looking to finish this fight”. 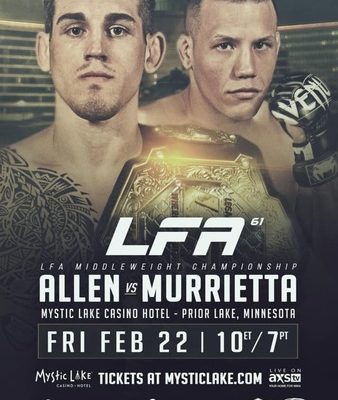