Last night at UFC 200, the organization reached another milestone and it could have happened on a more historic night.  The first openly gay champion was crowned as Amanda Nunes defeated Miesha Tate in the main event in Las Vegas for the bantamweight title.  With the win, Nunes also became the first Brazilian female to obtain a title in the UFC as well.

Nunes has been involved with Nina Ansaroff, also a UFC fighter, but in the lighter strawweight division.

“Nina is the best training partner I’ve ever had in my life,” Nunes said.

“This girl is going to be the next UFC champion. I’m telling you. Look at her, she’s shy. This girl has so many talents.

“She means everything to me. This girl, she helps me with everything. … I love her.”

Not the First In Sport

While the crowning of the first openly gay champion is significant for the UFC and for the LGBTQ community, it is not the first time that an openly gay fighter has won gold in a major organization.

As the sport continues to grow more and more athletes are continuing to talk about their sexuality. 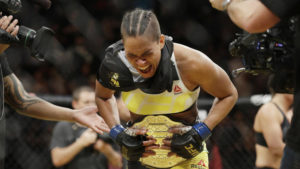 The UFC alone has a handful of gay fighters signed to their roster.  Currently in the all female mixed martial arts organization, Invicta FC, Tonya Evinger wears the bantamweight belt.  Evinger is an openly gay fighter and it is inevitable that with the way she continues to win, the UFC cannnot ignore her any longer.

Depending on how long Nunes keeps the belt we could possibly see Nunes and Evinger fight one another for the belt which would be another historic moment for the LGBTQ community.

“Just as it takes courage to step into the Octagon, it takes courage to stand for what you believe in — and we’re proud to stand with members of the LGBTQ community in their fight for equality,” UFC senior executive vice president and COO Lawrence Epstein said in a statement. “As friends and allies of the LGBTQ community, our hope is to raise awareness and help support community groups like the LGBTQ Center that directly impact LGBTQ individuals.”

The UFC has been supporting the LGBTQ community with their new “We Are All Fighters” t-shirts.  All proceeds from shirt sales go to the LGBTQ Center in Las Vegas.  The shirts were sold all week at International Fight Week and are expected to be sold online at a later date.

By Connor Northrup 12 mins ago

Gerald Meerschaert: Willing to Fight Anyone

By Lucas Grandsire 13 hours ago

IMMAF Registers For Action in Switzerland