Sean Wheelock opened up to MyMMANews.com about his participation in co-authoring the book, ‘Is This Legal? The Inside Story of the First UFC from the Man Who Created It.’

Wheelock, along with one of the founding fathers of the UFC, Art Davie, were both on hand at the MMA Classic Fan Expo in Syracuse, New York, where they discussed the evolution of the sport.

“This is great for me.  It’s funny, I’m a 15-year old kid again,” Wheelock said in participating in the expo with mixed martial arts legends.

Wheelock said that as a youngster it was his mother who purchased the very first UFC on pay-per-view for him, and ever since he has been hooked.

He eventually became the famed voice of Bellator MMA before his release earlier this year and will now take a commentating role at Titan FC 36 this December.

The event takes place December 18, in Kansas City, Missouri and streams on UFC Fight Pass as part of the organization’s streaming deal with the UFC’s digital network.

Wheelock also talks about a new podcast that he and referee Big John McCarthy have partnered together on called ‘Let’s Get it On.’ 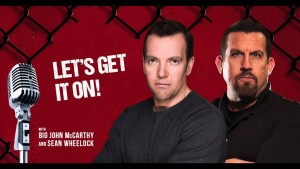