This Saturday, March 9, 2019, Chris Shahgholi’s new promotion, the Submission Only Grappling Invitational, aka SOGI, will be featuring its inaugural event at The Dojo NYC in New York.

The event will feature superfights as well as tournament brackets in the welterweight, middleweight, heavyweight and bantamweight divisions, where SOGI will be crowning champions in each division and giving out cash to all the winners.  All matches in the brackets are submission only with no time limit and no overtime round.  In order to win in the tournament bracket the competitor will have to force his opponent to tap to end the match.  Superfights will be featured to break up time in between brackets and will be 10 minutes ending in a submission or draw.  Doors will open for spectators at noon and the event will start at 12:30 p.m.  You can catch the live stream on the SOGI Youtube page once the event begins.  Check out the full event schedule below. 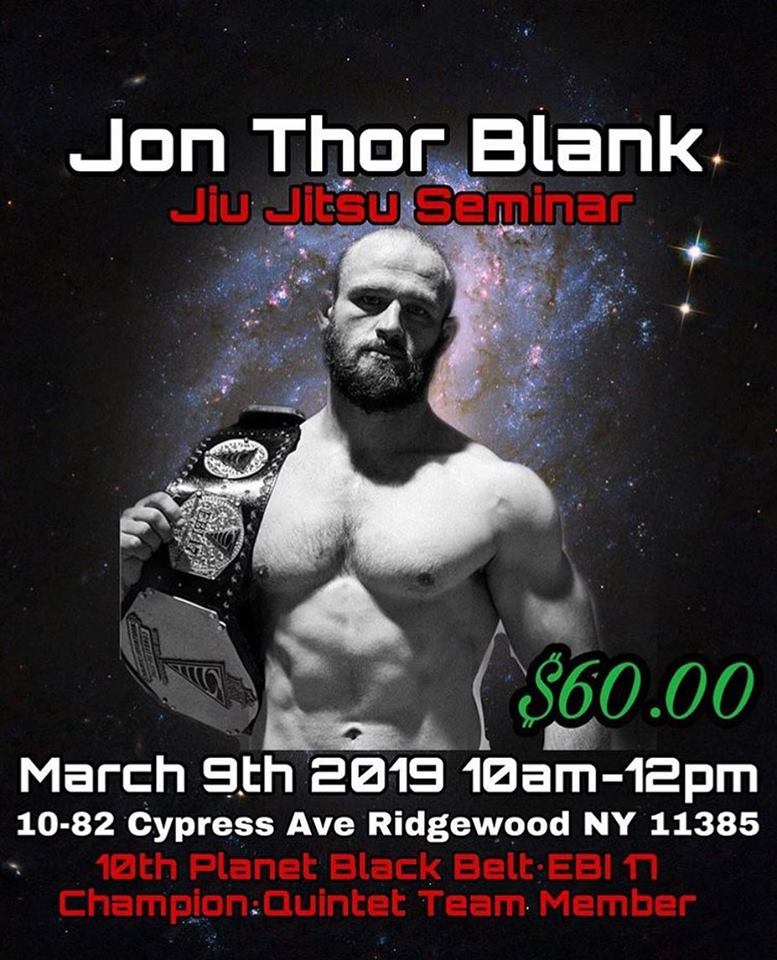 Prior to the event will be a seminar featuring EBI 17’s Combat Jiu Jitsu Middleweight Champion and 10th Planet Bethlehem black belt Jon “Thor” Blank.  The seminar will begin at 10 a.m. and run until noon when the doors open for SOGI, and Jon will be going over back control and attacks.  Cost is $60 and spots are still available if you would like to attend.  Jon recently competed in the Combat Jiu Jitsu Fight Night absolute tournament, defeating UFC veteran Kevin Casey in under 30 seconds.  He is also considered one of 10th Planet’s top 25 pound for pound competitors.

SOGI 1’s main event match features Aaron Harris from Black Hole BJJ and Vincent Morro from Renzo Gracie Bayside.  Harris has been racking up wins at Men of War Pro and will be looking to take on a tough competitor in Morro, who is a RISE Invitational veteran and trains with other Renzo standouts such as Daniel Hernandez and Frank Rosenthal.

SOGI also features a few interesting female superfights, with a main event female superfight between Rhodes Faraday, who currently trains out of 10th Planet Freaks, and Alanis Santiago, who trains at Unity BJJ and is regularly picking up gold medals at IBJJF tournaments.  It will be interesting to see Santiago under this type of ruleset since Rhodes has far more experience in submission only events.  Other exciting women’s matches on the card include Renzo Gracie’s Katya Leontyeva in a match up against Kelly Chan, as well as a bout between Cathryn Millares and Kelsey Singh, who both recently appeared in superfights at the Finishers Sub Only 8.

Two of the competitors on tomorrow’s SOGI card will be pulling double duty, with Zack Edwards of 10th Planet Bethlehem competing in both the welterweight and middleweight tournament brackets.  Edwards is a regular competitor and has been seen on events such as the RISE Invitational, the Finishers Sub Only, Men of War Pro and SAGC, just to name a few.  Both the welterweights and the middleweights will have to look out for his slick leg attacks as he tries to take home two cash prizes.  Zack is often stepping up to compete in multiple matches at different events, much like Jack Stapleton, who will be in the bantamweight division and has a special match against Li He right before the main event superfight.  Stapleton also competed recently at the Finishers Sub Only where he was in both the tournament bracket and a superfight there as well.  These two are the epitome of anyone, anywhere, any time and you can expect some exciting matches from them.

Standout competitors in the tournament divisions include Edwin “Junny” Ocasio, who recently won the 135 pound sub spectrum tournament this past weekend and will be looking to pick up some more cash this weekend SOGI’s bantamweight bracket.  He will be facing Stapleton, mentioned above, in the first round.  The bantamweight bracket also includes Sam Micale, who has been a regular competitor on the east coast in events such as the RISE Invitational and the Finishers Sub Only.

Nick Rodriguez and Alex Nemeth will both be featured in the heavyweight bracket.  Rodriguez has been gaining popularity lately after winning the west coast ADCC trials and an impressive performance at the Finishers Sub Only 8 a couple weekends ago.  Alex Nemeth from Strategic BJJ is a seasoned competitor and has appeared on events such as the RISE Invitational, Finishers Sub Only and Fight 2 Win Pro, among others.  Enrique Galarza, a black belt training out of Silver Fox BJJ, is one of the top seeds in the middleweight division.  He recently won the Pura Vida Invitational 7 and competes often under all different types of rulesets.

The welterweight division is the most stacked with 13 competitors, 3 of which will be receiving a by through the first round of the bracket.  Top seeds likely include Michael Kastroba, training out of Vanguard, Kobie Roland, training out of Unity BJJ, and Nick Gullo, who trains at Serra BJJ. 10th Planet Bethlehem competitors certainly showed up for this event and take up 3 of the 13 spots in the welterweight tournament with Zack Edwards as mentioned above, as well as Rene Sousa and Tom Cellamare.  Cellamare also has a tough first round match up against the wild card Rob Best, who has been known to embrace the idea of snapping or napping instead of simply tapping.  Cellamare is really going to have to put Best away in order to move on to the next round of the tournament, particularly under the no time limit submission only ruleset.

This event is definitely one that you will want to catch this weekend if you are into true submission only jiu jitsu.  Shahgholi is already hard at work planning SOGI’s second event as well, which will feature a 16-woman absolute tournament and a Quintet rule team tournament.  Contact Chris for more info if you would like to compete on SOGI 2.