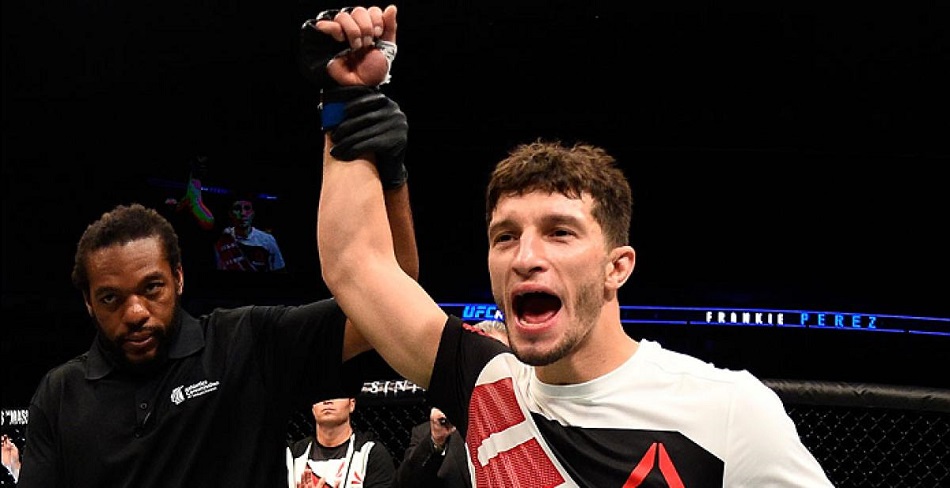 I recently sat down with New Jersey native and UFC lightweight, Frankie Perez.

You can see it in his eyes and hear it in his voice; how passionate he is about the sport of mixed martial arts.

While we sat in the office of his “other job”, Xplosive Entertainment, where he is a partner with his two friends Mike and Jordan, we talked about his life in and out of the octagon.

Frankie, who in his time outside of the cage can be found DJ’ing or dancing at a wedding or playing leftfield with his Howell championship softball team, has the perfect balance of being a kid from Jersey and being a guy who can submit you in the blink of an eye. Our interview can be found below.

“Originally from Wallington, New Jersey, but when I was in 8th grade we moved to Howell, New Jersey.” 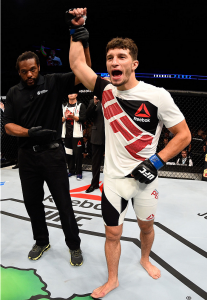 “I eat a lot of food and I will eat anything, but I am a fiend for pizza and Chinese food.”

“I played baseball, basketball, and football. I was a wide receiver in football, but I only played one year at Howell High School. Baseball and basketball were my better sports.”

“My neighbor used to invite me into his house and his dad would teach us Jiu-Jitsu in their basement twice a month. Another friend invited me to some fights. He could not go so I bought his ticket off of him. I went with my dad, and Dante Rivera (my teammate) was the main event. A lot of old school names were on that card and I fell in love with it. After high school I didn’t know what I wanted to do and thought this would be cool. I went down to Belmar, New Jersey the next day and started training at Jersey Shore BJJ with Jason Scully.”

“There are so many great fighters right now. I really like Joanna Jędrzejczyk. I think she is a real talent. I do have to be biased and go with Frankie Edgar. I have a lot of favorite fighters, but those right there stand out.”

“90s Hip-Hop. DMX, old school Ja Rule, Jada Kiss, Nas, and Tribe Called Quest are my top guys to listen to. I am a big R&B fan too so Brian McKnight, Boys II Men, and New Addition. But current guys I would have to say Bruno Mars and Meek Mill keep it for real.”

“I am a grappler. I love to strike and I have been working so hard and diligently at my striking over the years, but I love BJJ. It is my life.”

“A lot of different people inspire me for different reasons, but to be honest my father inspired me a lot. He did not finish high school and struggled his whole life and after all the trials and tribulations he built himself up to having a multi million dollar company. He had the heart and the strength to keep driving after growing up the hard way in Brooklyn. He pushes me and looks out for me and he is super honest with me.”

“My dad, my older sister Bianca, and my older brother. I keep it very to the family. My sister has had MS for over 10 years. You would never guess it. She goes through the motions and deals with it and you would never guess she was sick. Every time I say I am not going to practice or complain about something that hurts I just think of her. And my brother was on the frontline with the Marines when 9-11 happened.”

“Chris Wade fight. We were both top kids in our region. There was a lot of hype going into the fight. We were both undefeated at the time. He beat me by split decision. I still want that fight back. But that fight elevated us to the next level. After that fight with Ring Of Combat I got a call to fight for World Series Of Fighting and then the UFC came calling after I won my only fight in WSOF.”

“I wouldn’t mind fighting anyone in my division, but Danny Castillo would be top because I don’t like him. He is a punk. I wouldn’t mind fighting his teammate Justin Buckholz. I am a big fan of Team Alpha Male though, so I have no beef with them. I was always a big fan of Cody Garbrant. It was crazy how he showed up and stuck to the game plan against Cruz and won the belt.”

“I am a Brown Belt. I have been with Ricardo since 2009 and before that I started at Jersey Shore with Jason Scully and then went to a place in Howell during my amateur career.”

“My first song when I became pro was Step Into A World by KRS-One. Not many people knew it other than some of my boys. So everyone used to call me Suave or Rico Suave, so I said I am going to come out to Suavemente and see how it goes. Everyone went nuts and I still get compliments. I will keep it until I stop getting compliments. I never had a nickname so I am leaning towards it being my nickname.”

“Dark chocolate M&M’s from the freezer. I always have a couple handfuls a day.”

“Wake up in the morning. Eat, then going to do an hour flow workout. We go through a routine hitting some mitts and grappling. Shower and then walk around town come back take a nap. Eat again, and then cut weight at night with the treadmill and hitting pads again.”

“Our team is so small. We have a strong bond. We have Frankie Edgar, Eddie Alvarez, Edson Barboza, Corey Anderson, Katlyn Chookagain and a lot of amateur and regional guys that are coming up. It is incredible the bond and chemistry we have so it is hard to just pick one when they are all so good.”

“When I am in camp I don’t want to be around anybody. There are a lot of days when I have a good practice so I will be in a good mood. My family is probably the only ones I do talk to, but every now and then I will call my boys and we will do something. I am mainly to myself during camp.”

“A lot was going on. I lost both my grandparents a month apart. I was sick of the sport. I had 8 straight years of hard work and I just lost my passion and love for the sport. I knew win or lose I was going to retire and it just so happened to be one of my greatest fights over one of my idols. I had a charity fight I was fighting in for MS and the fight got cancelled and I just broke down. I missed the sport and I knew I was meant for it so I came back.”

“I am a hustler. I can make money doing anything. But I would love to be a comedian. I want to do one of those open mic nights soon. But I would be enjoying life and enjoying family. I DJ on the weekends doing weddings and Bar Mitzvahs and stuff so I would keep doing that. I started that before fighting so definitely doing that, but who knows what else.”

“I started right after high school with my friend VJ. We started with house parties and then we started doing bars. Then came clubs. Then I met my partner Jordan. He hired me the next week and I started dancing and Djing right then. I started my own thing a couple years later then met back with Jordan and my other partner Mike and created Xplosive Entertainment.”

“President of the United States. Just kidding. I will definitely be retired from fighting. I might open a gym, but who knows. There are so many gyms around. I definitely want to travel, have a family with some babies running around.”

“Waiting for a phone call. Staying in shape, staying ready. My knuckle was fractured in my last fight and I got the all clear so I have been training, staying in shape. I would love to do Buffalo or Brooklyn which are both coming up. I am ready to go whenever they call.” 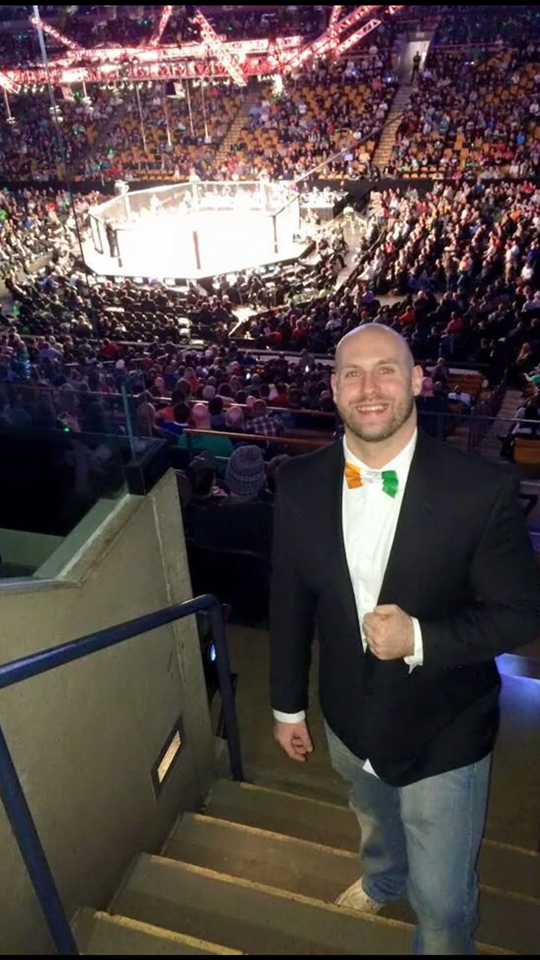