We have a pretty exciting main event coming to us this weekend at UFC Vegas 21, as Leon Edwards finally makes his long awaited return to the octagon opposing No. 13 ranked Belal Muhammad.

This is a very intriguing match up for so many reasons. Perhaps the biggest of them, Edwards hasn’t fought since July of 2019, the same amount of time Muhammad has gone 3-0 in. That makes this fight difficult to predict.

Edwards is ranked at No. 3 in the world at 170 lbs, where he’s been since he defeated former UFC lightweight champion Rafael dos Anjos. The issue of course is that he hasn’t been able to compete since.

First, he was slated against former UFC welterweight champion Tyron Woodley for a March event in 2020.

As we know, Covid-19 happened, and shut down the borders, thus making it impossible for Edwards to travel to the United States. This was the first cancelled card after Covid hit, and we wouldn’t see any more fights for two months.

The UFC then ended up scheduling Edwards against rising star Khamzat Chimaev, which was an even more exciting fight than this one going down this weekend. Edwards tested positive for Covid-19 however, and the bout was cancelled.

Edwards versus Chimaev was rescheduled two more times, only for Chimaev to suffer severe symptoms and have to continue withdrawing from the scheduled bouts. However, Belal Muhammad is healthy and ready to take on the challenge that is Leon ‘Rocky’ Edwards.

Muhammad has been in the UFC since July of 2016, coming over immediately after winning the Titan FC welterweight championship. After going 1-2 in his first three promotional bouts, Muhammad has gone 8-1 since.

Muhammad improved his professional record to 18-3 with this victory, just as Edwards did over dos Anjos nearly two years ago.

Leon Edwards has been in the UFC since November of 2014, and has only been defended two times. He came in with a record of 8-1, the only defeat coming via DQ. After losing a split decision to Claudio Silva in his promotional debut, he rebounded with an eight-second KO victory over Seth Baczynski, as well as a UD in his next bout.

However, he’d then run into a young Kamaru Usman, the current UFC welterweight champion, and was out-wrestled for three rounds. Edwards hasn’t lost since this though, and he’s defeated the likes of Albert Tumenov (rear naked choke), Vicente Luque (UD), Donald Cerrone (UD), Gunnar Nelson (SD), and obviously, Rafael dos Anjos (UD) since. 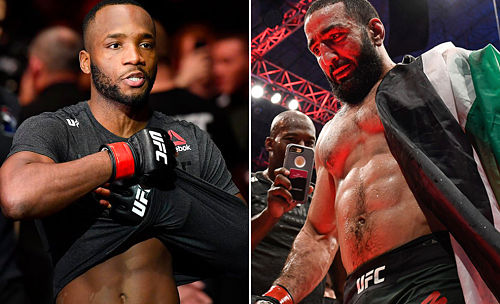 One would think, with both of these studs being active, Edward’s would be able to handily out-point Muhammad to a decision victory. He hasn’t been though, and we never know how someone will come back after that long away.

Dominick Cruz has defied ring rust more than once, but let’s use another welterweight as an example. Santiago Ponzinibbio returned earlier this year after two years away, only to be viciously KO’d by Li Jingliang.

He didn’t at all look like himself in that fight. It’ll be interesting seeing how a top five contender does after 21 months away. Let’s hope Edwards can compete like the elite welterweight he is come Saturday.

Who walks away this victor in this welterweight main event at UFC Vegas 21?