UFC light-heavyweight contender Anthony Smith was just handed his second straight defeat this past Saturday at the hands of Aleksandar Rakic, marking the first losing streak of his 205 lb run. 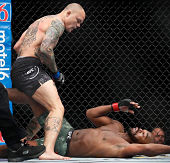 This granted him a world title shot against Jon Jones, which he lost via unanimous decision. He rebounded just three months later with a fourth round submission (rear naked choke) victory over Alexander Gustafsson, perhaps the best 205 lb fighter ever to have never won a title.

Smith’s record at light-heavyweight was now 4-1, all four wins via finish, and his only loss coming to the champion on the judges scorecards. That’s not the case anymore however, as he’s lost his last two fights to Glover Teixeira, and now Aleksandar Rakic. 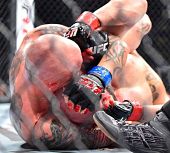 His fight with Teixeira was upsetting, because he was doing so well early on. The first two rounds handily went his way as he was picking the Brazilian apart, but his output was incredibly high, and he got fatigued considering. This could be because of his corner non-stop screaming at him to attack, or it may be that he just didn’t expect the fight to go five rounds.

Smith is a veteran, he’s been doing this a long time, with a long amateur career and now 49 professional fights. It’s doubtful he just overlooked Teixeira. Nonetheless, he ended up getting battered in rounds three and four, and was ultimately finished via TKO in round five. 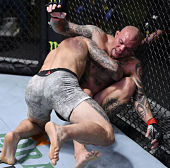 He looked to get back in the winners circle this past Saturday against Rakic, but just couldn’t get anything going. They both opened up with some vicious leg kicks, though Rakic’s were more effective, as he dropped Smith with one of them less than 90 seconds into the opening round.

‘Lionheart’ ended up diving on Rakic’s leg and ended up taking his back briefly, but was shook off and spent the rest of the round on his back. Smith tied up with Rakic at the start of round two, but he lost his grip, slid off, and ended up on his back again.

Smith was then on his back for the rest of round two, and the same exact thing happened in round three, where he again spent four plus minutes on the ground being controlled. Once it was over, he lost via unanimous decision, losing all three rounds.

This is certainly a credit to Rakic, that kid is the future, but Smith has shown a pattern in his career.

Something Smith does in his fights, and it happens frequently, he’ll be in a good position, but he ends up on bottom at the end of the exchange. He’ll be tied up with his opponent, then just slip off and end up on his back, and he’s comfortable in his guard.

This is something that’s happened to him time and time again. If he could just work on not letting those opportunities turn into mistakes that cost him the fight, he’d have a lot less losses on his record.

It happened to him in this fight, it happened to him when he fought Teixeira, Oezdemir, even though he won that fight, and it’s happened in many others. It’s also a matter of him not being that comfortable on his back.

He does attack off his back, and his grappling has gotten very good over that last few years, but he’s not dangerous enough to submit most of the best from his guard. The problem is, he just stays there, he doesn’t try to get up. It does take a lot of energy to get up off the bottom, and he is a big guy, but he’s just losing on points when he stays there.

Chael Sonnen also said Smith is a victim of his own decision making, only he had a different perspective. He believes that Smith should take some time off to heal his mentality. He got his orbital bone broken, and also got two of his teeth knocked out in his fight with Teixeira, and he fought Rakic only two-and-a-half months later.

Not only that, but Sonnen believes he needs a little time off to reassess his career and what his next move should be. When you’re constantly grinding in the gym and fighting as often as Smith does, not only are you not giving your body as much time to recover as it needs, but also your mentality.

Smith doesn’t take breaks, the longest stretch he went without a fight was between his fights with Gustafsson and Teixeira, which was just a couple weeks shy of one year away from the cage.

He’s only had two calendar years since his professional career started in 2008 that he didn’t fight more than twice, which were 2017 and 2019. He fought twice in each of those years, every other year he had three or more fights. He’s had two so far this year, we’ll have to wait and see if he comes back before the years end.

Smith stated it was the leg kicks thrown by Rakic that played the biggest part in the outcome of their fight. That’s why he decided to tie up with him at the beginning of rounds two and three, he “couldn’t take one more leg kick.” If that wasn’t a factor, he said he would’ve stayed in boxing range and just struck with him.

‘Lionheart’ has stated that he either needs to return to 185 lbs, or put on some mass in order to stay at 205 lbs, both of which he would have to take some time off in order to do. Fighting at middleweight for him, it’s a “complete lifestyle change” in order to walk around at the necessary weight to make 185 lbs, and it’s also a lifestyle change to be pumping iron constantly.

Should he return to middleweight, the winner of Ian Heinisch versus Brendan Allen would be a fitting match up. Heinisch is ranked at No. 14, and if Allen defeats him, he should take that spot. The No. 12 ranked Brad Tavares would also be a good return fight to 185 lbs for him.

The No. 7 ranked Derek Brunson has also looked great lately, going 3-0 since moving his camp to Sanford MMA. That’d be a good way to be put right back into the top of the division should he win.

The fight we all want to see him in though, and it has a likelihood of happening now, is a fight with former Strikeforce and UFC Middleweight Champion Luke Rockhold. It looked like we may get to see it happen sometime last summer when Rockhold moved up to 205 lbs, but he lost to Jan Blachowicz and retired afterward.

Rockhold has announced he’s coming back however, and he’d like to come back at 185 lbs. They had some words with one another last year, and Smith, as mentioned above, is teasing a middleweight return.

They could even meet at a catchweight of 195 lbs to ease things, considering neither of them have made the middleweight limit since February of 2018. Their last middleweight fights were a week apart from one another.

This fight would be a privilege to witness. Both have great kickboxing, and both have BJJ black belts. Smith is 6’4” with a 76” reach, Rockhold is 6’3” with a 77” reach. Hopefully the UFC can make it happen this time around. Regardless, we’ll be tuning in to both of their next fights.

What’s next for Anthony ‘Lionheart’ Smith?

Jared Gordon vs Paddy Pimblett: A fight with a message much stronger than win and loss