The world’s most dominant mixed martial arts champion, Jon “Bones” Jones, returns to the octagon for yet another UFC tile defense this Saturday night.

In the main event at UFC 247 in Houston, Texas, Jones will defend his light heavyweight championship against an undefeated “Devastator” in Dominick Reyes.

While, on paper it may seem that Jones has the upper hand, here is why bookies are suggesting that Reyes could topple the 205-pound kingpin.

Even though Jones is currently listed as a -500 favorite to Reyes’ +350, experts are making their case that if any light heavyweight is going to dethrone the champion, the 30-year old Californian is the man to get the job done.

Click the image below to see what the experts are predicting. 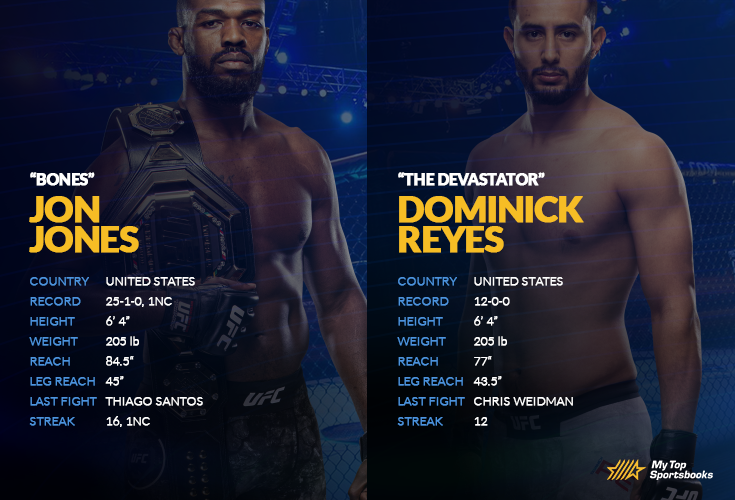 Since coming to the UFC in 2017, Reyes has defeated six straight including two former title challengers and one former champion.

In his last outing, Reyes stopped for UFC middleweight champ Chris Weidman less than two minutes into their fight.

Prior to that, “The Devastator” took former contender Volkan Oezdemir and Ovince St. Preux to the scorecards, getting his hand raised in victory.

While Jones may be near perfect and as dominant a champion the sport has ever seen, Reyes currently beats “Bones” in one key category… but it isn’t by much.

When it comes to the significant strikes landed per minute, Reyes is sitting at 5.03 compared to Jones’ 4.31.

The champion currently has a better striking accuracy, few strikes absorbed per minute, a higher striking defense, a higher takedown average and accuracy and defense percentage, and more submission attempts per 15-minutes than Reyes does.

So, if Jones is that good, why should Reyes be considered a threat?

He’s undefeated, he’s young, and he’s hungry. Sometimes that is all it takes. If Reyes defeats Jones on Saturday night in Texas, he will become the first fighter in history to truly hand “Bones” a loss. The only blemish on Jones’ record was a disqualification from an illegal blow 11 years ago against Matt Hamill.

Will Dominick Reyes shock the world at UFC 247?

By Drake Riggs 4 days ago

King & Slim: What Should Be Next For Jon Jones?

By Anthony Walker 4 days ago

Why Is MMA An Ideal Sport For Shy People?

By Jessica Walter 6 days ago

By Michael Henken 1 week ago