There’s absolutely no reason we need to see this fight again but here we are. Canelo Alvarez and Gennady Golovkin are fighting for the third time in their “trilogy” because seemingly nobody can let go of the fact that GGG didn’t win the first fight and it was ruled a draw. Now, Canelo is up on GGG 1-0-1 and we have to have a rubber match that means nothing. GGG has looked bad in his previous fights and Canelo is coming off of his second career loss to Dmitrii Bivol. But it’s a marquee fight and we need to break it down. Let’s dive in for this new edition to Beforemath for Canelo vs. GGG 3!

Canelo vs. GGG 3: Tale of the Tape

We have only seen Canelo come off of a loss one other time in his career. After he fought Floyd Mayweather to a majority decision loss, he took some rather tough matchups for himself, specifically Erislandy Lara who had a close fight with the Mexican star. Eventually, Canelo became that much better because of the loss and went on to possibly eclipse Mayweather’s accomplishments in the ring.

Since the Golovkin fights, Canelo put on a series of masterclass performances. He beat Rocky Felding, dominated Danny Jacobs and then knocking out light heavyweight Sergey Kovalev. After that, Canelo unified super middleweight by beating Callum Smith, Billy Joe Saunders, and Caleb Plant.

Canelo then flew too close to the sun and took on a light heavyweight that wasn’t washed up like Kovalev. Bivol’s size and power combined with the extra weight put on from moving up saw Canelo handed his second straight loss.

Things have been good for Golovkin but it’s obvious he’s slowed down. Now 40 years old, GGG isn’t a spring chicken. After suffering his first career loss to Canelo in their second fight, Golovkin has been not too active. In 2019 he knocked out Steve Rolls. After that, GGG looked really slow against Sergiy Derevyanchenko. After a year off, he made Kamil Szeremeta retire. Lastly, Ryota Murata fell to GGG with a big TKO where GGG didn’t look as bad as the Derevyannchenko. Could Derevyanchenko be a tough matchup for GGG? Yes. But I predict that GGG is simply showing his age.

Canelo: Back To Winning

For Canelo, this fight shows that he’s not taking easy fights. GGG has tested him in the past. On paper, this fight should be another tough matchup for Canelo. But as mentioned above, Golovkin is aging. This will be a huge showcase for Canelo. Golovkin has a big name in the boxing world that extends outside of boxing and into the general population, as does Canelo. A knockout of GGG will be huge for Canelo in an “I’m back” type moment.

The main problem we saw with Canelo against Bivol was two-fold. First, Bivol was simply too big. There are weight classes for a reason and just because he knocked out Kovalev didn’t mean that Canelo could beat a prime light heavyweight. His power didn’t translate well and Bivol used his size and, surprisingly, his speed advantage. The speed was the second issue for Canelo. With all the extra mass Canelo put on to make light heavyweight, he really looked like a normal guy and not built like a champion. He was slower than Bivol and it showed, especially later in the fight. 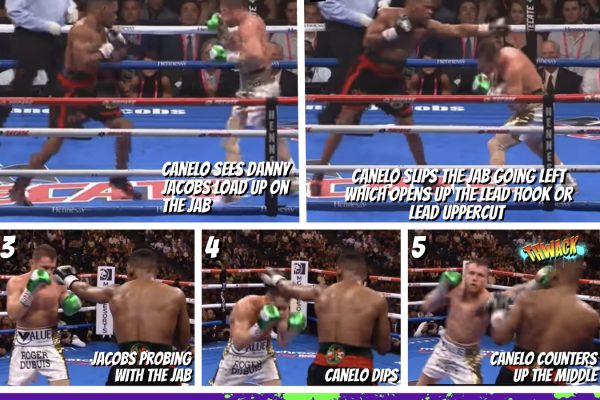 To take a look at what I expect from Canelo, we’re going to use the diagram above. Canelo is fantastic at being aware of his opponent’s entire body. Against Danny Jacobs, the Mexican put on a defensive masterclass. Jacobs was trying to gauge Canelo and get combinations open with the jab and Canelo saw it coming from a mile away. In the most iconic part of the fight, Canelo (1) sees Jacobs load up on the jab. He sees this with the lead foot of Jacobs stepping in, as he should, on the jab. The problem is, Jacobs is simply too slow. (2) Canelo would then slip the jab to his left and that would open up the lead hook up top or down low, and the uppercut among other shots. But Canelo wouldn’t fire just yet.

Next, (3) we see Jacobs doing the same thing later in the fight. He leaves his lead hand out too long and it freezes him when Canelo dips. Of course, (4) Canelo does as he’s extended for a hair too long. Again, he goes to his left. Instead of making the read, like he did earlier, Canelo (5) lands the up-jab that snaps Jacobs’s head back.

With Golovkin being so jab oriented and having lost a step, I can see Canelo going in with another beautiful performance and we might just get some more of this mesmerizing head movement we’ve come to love from the Mexican phenom.

GGG: The Path Is Murky

For Gennady Golovkin, beating Canelo Alvarez at 40 will require some late career-George Foreman type magic. As I’ve said ad nauseam, Golovkin is slower. On top of that, he’s moving up to super middleweight from middleweight at long last. We saw how going up affected Canelo. This won’t be as drastic as a step up, but it is a determining factor. GGG will have to put in a movie-like performance to pull this fight out. How can he do that?

My first instinct was to say that GGG needs to fight in the clinch to wear on Canelo, lean on him, and tire the cardio-machine just to keep the cardio gap close. But there, Canelo will thrive with his speed. Instead, Golovkin can work the body from a distance. We saw with Dmitrii Bivol that Canelo suffered with the straight jab to the body. While GGG isn’t as long as Bivol, he can still utilize this strike. He will just have to make sure not to telegraph and leave himself out there too long or he will catch a cross on the counter that could put his lights out.

The second thing he’s going to have to do is, and this will be controversial, fight boring as he can. Make this fight uneventful and make the judges really think about how to score these rounds. GGG is good from distance and if he can score consistently with the jab all while not giving Canelo something to counter, this fight is conceivably winnable for GGG.

But these are tall orders for GGG. Canelo has a way of taking his opponent’s game plans and turning them upside down. It won’t be easy, but then again defying the odds never really is.

Be sure to tune in next week for Canelo vs. GGG 3 Aftermath where we will break down the fight in similar fashion to this article! Thanks for reading.

Blaine Henry can be found on Twitter, on his Substack, and Discord.