With CBD being the newest craze in alternative natural health, the cannabis plant has become a saving grace for millions of people worldwide for the plethora of ailments it assists/treats. Josh Palmatier’s Conquer CBD is diving in head first to “Conquer” the CBD market.

Pennsylvania native, Palmatier was an accomplished, fully licensed electrician whom was making a great living, but lacked the love and passion for the work he was investing his time and long days into.

If anyone is familiar with the movie “Office Space”, you’ll understand Palmatier’s daily struggle to find the motivation to stay in the field. So, what did he do?

Quit! Palmatier walked into work, knowing he needed to make a risk-reward type of change in his life, and set his newly developed plan in motion to get away from his distraction of the construction days, and focus on his passion of helping others recover, heal, conquer. Especially with a focal point to give back to the MMA community.

When Palmatier’s brother was diagnosed with leukemia, it was his family and his training partners at Gracie 717 that helped Palmatier’s sibling fight, battle, and CONQUER his battle with leukemia. Stating:

“I’ve been interested in MMA for a long time and my brother actually trains here, locally at Gracie 717 and he had a fight a couple years ago, I got to be in his corner and stuff like that. So, it was really cool! I just love the community. I love the brotherhood. And, he was actually diagnosed with leukemia 3 years ago and it was cool to see just how the guys at the gym like really supported him, stayed behind him and stuff like that. And he’s cancer free now! But yeah, I love the sport! I’m not a big sports guy but I do love to watch MMA and UFC, and all that stuff.”

“I saw that CBD was having an impact on people’s lives. It was bettering their health. It was bettering their mental state. All this kind of stuff and as an affiliate for different brands, I was able to see the different…there’s like a wide range in quality of CBD that’s available. There’s like a couple companies that make a good quality product! But there’s also a lot of other companies that are selling stuff that, sure, it’s cheaper but, doesn’t work. Not great quality. So, in my mind I’m thinking ‘hey, this is an opportunity to number 1: Make an awesome product that’s going to help people and change lives. Number 2: See if I can fuse that with my passion for MMA.”

Knowing the cannabis industry is only growing and MMA clearly hits so close to home for the young entrepreneur, Palmatier put his money where his heart and passion was by sponsoring a friend he’s known for years. The same friend that just so happened to be in the midst of the biggest training camp of his life… another Pennsylvania native, Blaine “Shuttdown” Shutt. Shutt was preparing to vie for the CES flyweight championship and Palmatier was proud to join Team “Shuttdown.” Being personally invested in this business wise and emotionally, fight night as he recollects was extremely nervous watching from his home on UFC Fight Pass. Shutt went on to capture the CES championship that evening.

Palmatier has a lot of goals in store for Conquer CBD in 2020, as his product is fully launched, lab tested, that is “always, 100% going to be THC free”, Palmatier says. “It’s tested from the time it starts growing in the ground until the time it gets put in the bottle.” Explaining further, “something that kind of makes Conquer unique is, or at least we’re one of very few in the field is that not only is it THC free, but it’s also broad spectrum”

To simply break down to the difference between full spectrum, broad spectrum and CBD isolate;

Full spectrum CBD contains everything from the plant including a small amount of THC. Broad spectrum contains everything from the plant but has the THC removed. Isolate being pure CBD. Many patients and users alike, especially fighters prefer broad spectrum due to the fact that it contains many of the beneficial facets of the cannabis plant that don’t come with CBD isolate. And with the THC being removed that might show up in full spectrum CBD, broad spectrum eliminates the stressors of failing a drug test and the psychoactive effects of cannabis.

Although, relatively new in the market, the future is looking bright for Conquer CBD! Palmatier’s heart is pure and he’s in the business for the sake of helping others.

Check out the full episode of MyMMArijuanicaChronicles with Josh Palmatier of Conquer CBD above. Palmatier and I breakdown the benefits of Conquer CBD over the competition, how the relationship with MyMMANews and Conquer CBD came to fruition, his sponsored CES champ Blaine Shutt’s recent win. As well as Palmatier describes what he’s looking for in his next sponsored athlete. Tune in!

“You’re not going to find a better product out there!” – J. Palmatier

While shopping, use promo code “MyMMANews” for an additional discount while checking out at the link below. 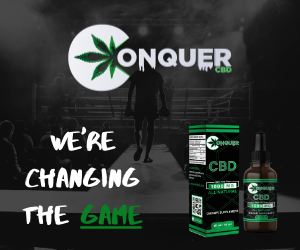 Also, make sure to follow Conquer CBD on social media at the links below. In the episode, Palmatier discusses his accessibility and transparency how keeping up with his customers interests and how his relationship with his clients are crucial. In case you have sponsorship inquiries, or need to get ahold of the man that’s set to conquer the CBD game, check him out below!

By Monta Wiley 1 hour ago