There have been a number of occasions where a fighter puts on an epic fight, but doesn’t walk out of the octagon the same man, or fighter he was going in.

This can range from world champions that couldn’t recover once losing their throne, it could be a talent with loads of hype that just got shattered and continued to be shattered in their fights coming.

This is a piece on the fighters that either weren’t capable of becoming Cinderella men.

In this top five list, we go over five fighters that never recovered from a loss they suffered, though they were expected to. We’ve also of course done a part one of this series, listing out five more fighters that just weren’t the same after a specific loss.

Be sure to check that one out as well!

But let’s get into it.

Continue reading to see five fights that changed fighters for the worse: 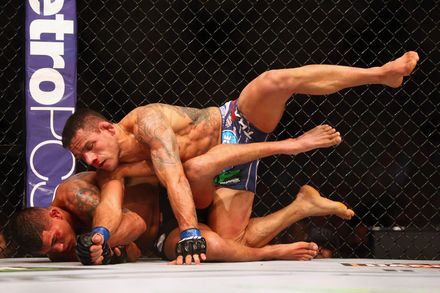 Going into his title fight rematch with Henderson, Pettis was coming off back-to-back KO victories, one over Joe Lauzon (head kick), and the other over former kickboxing champion Donald Cerrone (body kick), becoming the first man to finish Cerrone with strikes.

There was so much hype on Pettis at this point he was even featured on 2015’s edition of Wheaties.

That is still to this day unheard of for fighters of any kind.

Pettis was expected to claim an easy victory here, against someone who’d been finished with strikes before.

But dos Anjos completely dominated Pettis from bell to bell, securing universal 50-45’s across the board. Dos Anjos out-struck Pettis 90-54 in significant strikes and took him down nine times in ten attempts.

What a straight up mauling this fight turned into.

Since then, Pettis lost two more fights, making it three-straight defeats since his last title defense, falling from 18-2 to 18-5.

Pettis would never regain consistency in his career, never winning more than two-straight since, and losing back-to-back encounters a number of times since.

Following a first-round submission finish in his first fight of PFL’s 2022 season, after going 0-2 last season, Pettis has since lost two-straight, both to fellow UFC veteran Stevie Ray, bringing his record to 25-14.

To be on top of the world, finishing the very best in the sport in ways it’d never happened before, to losing to talents that couldn’t compete in the UFC. Pettis went from an 18-2 multi-time world champion (twenty fights) to 25-14, going 7-12 over his last 19 fights. 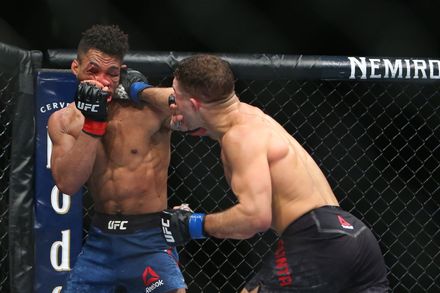 Kevin Lee was once upon a time one of the premier, most hyped fighters in the entire sport, and for a good reason.

Coming to the UFC with a record of 7-0 as an incredible athlete with a solid wrestling background, Lee would lose his promotional debut to Al Iaquinta, before going 9-1 over his next ten.

He went into his interim title fight with Tony Ferguson on a five-fight win, four-fight finish streak, and after handily mailing Ferguson early on, he’d get submitted in the middle stretch with a triangle choke, bringing his record to 16-3.

This didn’t hinder his trajectory much though. He went into the fight with a staph infection, which effected his endurance greatly, and he handed longtime top lightweight Edson Barboza one of the most vicious beat downs of all time in his fight following, resulting in a fifth round TKO stoppage.

Honestly, the mauling Khabib Nurmagomedov gave Barboza didn’t even come close to touching what Lee did to him.

But his next fight after Barboza, a rematch with Al Iaquinta, did hinder his trajectory.

Their second fight was much like their first; in the first, Lee took Iaquinta’s back and held in for the majority of round one and was outboxed in the second and third.

In their rematch, it was 2-2 going into the fifth.

Lee was able to out-grapple Iaquinta, taking his back for a good portion of two rounds, but was also out-struck in two of those rounds. Then in the fifth and final round, Iaquinta boxed Lee up pretty bad, and won the decision once again.

Falling 0-2 to Iaquinta really did something to Lee, as he’d go 1-4 over his next five contests before leaving the UFC for Eagle FC, where he unimpressively defeated a washed-up Diego Sanchez earlier this year in March via unanimous decision.

This improved his record to 19-7, but at nearly 30 years old, it appears his time is now or never to really become something big.

His mentality has always been his downfall, however. Lee has the physical part of fighting down, and he has the skill, but not taking accountability for literally any of his losses, along with losing to Iaquinta twice really changed him for the worse. 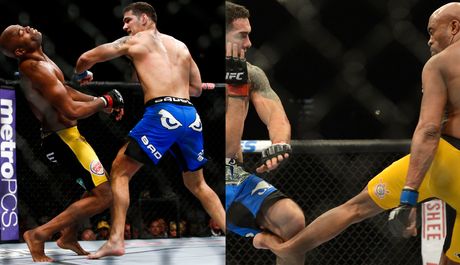 Chris Weidman really shocked the world in the summer of 2013 at UFC 162 when he KO’d the greatest to ever do it, Anderson Silva in round two of his first ever world title fight.

Weidman was an ROC champion prior to coming over to the UFC, and he was just 9-0 going into this title fight with Silva. Following a typical-Silva round in the first, where he handily picked Weidman apart, he’d get caught clowning Weidman in the second and was KO’d on the spot.

An immediate rematch would ensue, giving a more definitive answer to who the better fighter was, though it’d end via TKO (injury) after Silva broke his leg courtesy of a check from Weidman.

The new champion badly hurt and dominated Silva in the first round this time around, and now that Silva had lost, twice in a row mind you, he’d never be the same.

One victory of which, coming over Nick Diaz, was overturned to a no contest after a failed post-fight drug test. The other victory came via unanimous decision over Derek Brunson, and it was a very heavily disputed outcome.

Most everyone believed Brunson to be the victor after the three rounds was said and done.

Then again, Silva’s decision loss to Michael Bisping was heavily disputed as well. Tis the game we love.

Other than that, Silva lost five more times, making him 1-7 (1 NC) in his last nine UFC bouts after winning his first 16-straight, including 12 title fights. The other four performances came in his UFC debut, and three moves up to light-heavyweight, securing first round knockouts in each, one of which came over a former champion that’d just lost the belt.

Anderson Silva was something truly special inside the octagon. He won and defended the Cage Rage middleweight championship three times prior to coming over, and then went on the most legendary tear ever in the UFC upon arrival.

To this day, no one has tied, or broken his record for 16-straight UFC wins, and he acquired 14 finishes in that time.

Going into his first fight with Weidman, Silva had a record of 33-4, and he left the promotion with a record of 34-11 (1 NC) on a three-fight losing streak. 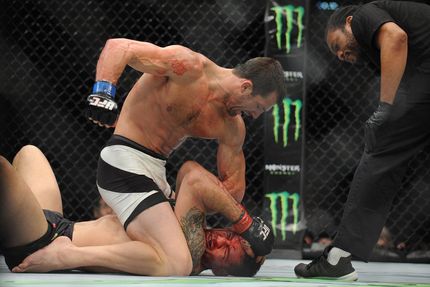 This was one of the most compelling fights of all time going into UFC 194 in December of 2019, as both men were world champions at the top of their games.

Weidman was 13-0, having won, and defended the UFC middleweight championship against Anderson Silva, finishing both fights via knockout as mentioned above. He then defended his title for a second and third time against former UFC light-heavyweight champions Lyoto Machida and Vitor Belfort.

We were all expecting a long reign out of him considering what he’d done, and how much of a prodigy he was. It’s not often someone with less than ten fights defeats the greatest ever, twice, then defeats two more of the best to ever do it in his fights following.

Weidman went into his fourth title defense against former Strikeforce middleweight champion Luke Rockhold, a man that won and defended that belt twice prior to joining the UFC’s roster.

During the middle of a back-and-forth battle that showed each man having a ton of success, Rockhold ends up taking the stud NCAA Division I wrestler down in the fourth and secured mount en route to a TKO finish.

To our surprise, following this bout, Weidman has gone 2-5, being knocked out in each defeat since. That means after opening up his career a multi-time world champion with a record of 13-0, he’s since gone 2-6, falling to 15-6 since his bout with Rockhold, all six defeats coming via some form of knockout or another.

Yikes, some fighters really just aren’t the same after some wars. He did it to Anderson Silva, and the same thing happened to him, regarding this, and regarding the leg break. 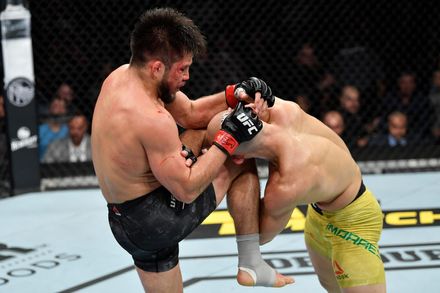 ’Magic’ Marlon Moraes is one of the most dangerous, well rounded mixed martial arts fighters of all time.

Following a 5-4-1 start to his career, being finished in all four defeats (two knockouts, two submissions), he’d find his stride in WSOF not long after, going 11-0 within the promotion, winning, and defending the bantamweight title five times prior to finally coming over to the UFC with a record of 18-4-1.

After losing his promotional debut in a very close split decision to longtime top contender Raphael Assuncao, Moraes would defeat The Ultimate Fighter 14 winner John Dodson, before going on a three-fight finish streak.

Long story short, Moraes was a straight up assassin; a Muay Thai champion, a six-time MMA champion, a black belt in BJJ under Ricardo Almeida, and a proven finisher who now had a record of 22-5-1 (16 finishes).

What’s more, as mentioned above, he avenged his defeat to Assuncao, and in a big way; that made him 17-1 in his last 18 fights, having defeated that only blemish in that time. That’s remarkably difficult to do.

Moraes couldn’t have had a better start to this fight. He absolutely battered Cejudo’s legs throughout the first round, handily and violently out-striking Cejudo 16-5 in significant strikes.

He picks up in the second round where he left off in the first, and things are looking rough for the flyweight champion, who was returning to 135 lbs for the first time in nearly five years.

But Cejudo toughed it out and wore Moraes down with his pressure, doing so with his striking. By time the third round came around, Cejudo was exhausting Moraes badly with his strikes, as he stays in the pocket and throws down with the former WSOF & Muay Thai champion.

Cejudo made it a fight, a dogfight at that. He brought a pace and ferocity we very, very rarely see.

The fight was stopped at 4:51 of the third round, seeing Cejudo the victor, as he just beat Moraes down badly. Since then, Moraes has gone 1-4, only winning a controversial split decision over former WEC & UFC featherweight champion Jose Aldo.

That makes Moraes 1-5 in his last six, losing all five defeats via knockout before retiring earlier this year with a record of 23-10-1.