Tony Reid – As a BJJ guy it is no surprise that you list Royce Gracie as an influence. Can you elaborate on the extent of his influence in your career?

Jeff Curran – “That was the day I knew this is what I wanted to do. The first time I saw him walking to the Octagon, man, the look in his eyes…Royce could have never done anything beyond that and I would still be just as much of a Royce Gracie fan as I am today. He and his family and the people they have touched in their lives and that ran down the trail to me and I have them to thank for everything. Not just the Gracie family but every Brazilian Jiu-Jitsu Black belt that helped pave this road in the beginning. That was my style, that was what I liked the most and those are the people I looked up to the most. I have a lot of heroes like that.”

Tony Reid – Many people involved in MMA in the States are preoccupied with a fighter’s record yet overseas there is more of an emphasis put on the performance, the entertainment value and other factors of the game. What are your feelings on “Paper vs. Performance”? 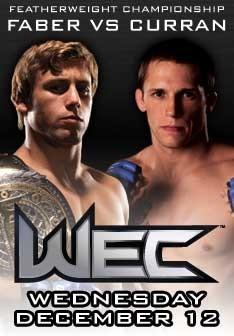 Jeff Curran – “I am 36-18-1 and I think its still a pretty good record. When you look at the losses, aside from the Uriah Faber glitch, every fight I had was competitive. A record it just that, a record. Talk about the three decision losses I had in the WEC-Benavidez, Mizugaki and Mike Brown. Those three fights were so close that basically nine people in the world decided that I was the loser in those fights. I came out with barely a mark on me, I fell I lost the Mike Brown fight fair and square, I gave up a few things I shouldn’t have, Benavidez was what it was and I definitely feel I won the Mizugaki fight. If I was getting finished off by mid level and upper level guys and these guys were just making a fool of me then I would know my place but I was very confident in what I was capable of and very confident that I belonged in the upper echelon of the division.”

Tony Reid – With those key close decision losses do you ever play the “what if” game and stop and wonder where you might be in your career had those decisions gone the other way?

Jeff Curran – “I can tell you I am one of those guys that sits home and studies, not only the fights of my opponents but I study my fights as well. I sit there, study the tape and I teach my fighters like ‘Guys, remember the Mike Brown fight when I did this? That’s why I lost the exchange.’ I learn a lot from myself and I feel like I’m a strong third round fighter. I don’t think I have ever lost a third round in my career. In the long run, if I can get to the championship fight, I might just be starting strong when I hit that third round and the third, fourth and fifth could be mine. I don’t play the what if game too much because I wouldn’t be where I am today had I squeaked by and won a couple of those fights. I am in this for the long haul. It would have been nice to have an easier road but such is life and now I know I don’t ever want to go back down that road again.”

Tony Reid -You mentioned that you show your students your fights as a teaching/learning tool. If you could choose only one fight from your career that you could show them which one would it be?

Jeff Curran – “There are different lessons in different fights. There was a fight against a guy, Kimihito Nonaka over in Super Brawl. It was at a very busy time in my life. I was opening the biggest gym I had at the time. I forgot I was fighting. Bart (Palaszewski) reminded me like “Jeff, we leave for Hawaii in three days and we haven’t even trained yet.” I was cooking out, painting the gym, hanging mats and all we had was a boxing ring and I hadn’t been using it. We were just working on the place and I looked at him and said “Are you kidding me? I thought it was next month!” So I went over there and I was so tired through the fight and I just kind of faked it. I fought my butt off and I had one of the best highlight reel finishes of my entire career. I remember looking at Bart in the corner after the fight, rolling my eyes and being like “Jesus, I can’t believe this just happened.” Not only got through it but came out on top. It showed me that it’s OK, during a hard training camp, to have those days to be a little lazy and to let your body heal. It taught me a lot of lessons about over training and things of that nature.”

Tony Reid – Speaking of Bart (Palaszewski), I interviewed him and he told me the story of how he got beat up at school by a kid in a Curran Martial Arts T-Shirt, which led him to your gym and his start in the sport. How do you remember that first meeting?

Jeff Curran – “He told me about that when he signed up. And I said “Little Jake could beat you up? He’s just a little kid! He’s only 100lbs!” He was translating for his mom and dad and we were signing him up and I was explaining the enrollment process and how to get his credit card information and what not. At first I was thinking this kid barely speaks English, how am I going to even get him to pay his bills? I remember shortly after that he burned himself. He very intelligently used a bucket of gas to put out a fire or something like that. So, he came in all burned head to toe. All he ever wanted to do was spar; all he ever wanted to do was fight. He has been a pain in my ass since the day I met him. We grew to be really good friends. He stood in my wedding. He is one of my full time striking coaches and Jiu Jitsu Black belts. Here we get to go make our 50th pro fight on the same card on the same night in the UFC, to say the least, is awesome. It’s such a good history. I love Bart; it’s been a long road with him.”

Tony Reid – If you could fight anyone in any other weight class who would you choose to fight and why?

Jeff Curran – “Outside of reality, I would love to see what its like to fight Anderson Silva at my weight. Stylistically, I always think like that. When it comes to Heavyweights I don’t really think about it. They are just so different than me, than any of us down here in lighter weights. I look at the best guys like GSP and Anderson Silva; I would love to see what it would be like to fight those guys. They are dominating their divisions but if they were my weight, how would they do down here?”

Tony Reid – If you had not found MMA or if MMA hadn’t found you, what would you be doing right now for a living and doing to fulfill different passions in life?

Jeff Curran – “The family business for our family has always been flooring. My uncle runs and operates his store. My grandma, into her 80’s, still did the scheduling. My mom works the desk and helps sell. Its just a little Mom and Pop deal. My grandpa taught everyone how to lay carpet, my dad, my uncle and my brother. I would probably be doing carpet. That was my first business right out of high school. I had my own truck when I was 16 years old. I had all my own tools, did all my own work. I just busted ass, so I would probably be slaving in that trade, hating life like I did back then. All I looked forward to was Jiu-Jitsu practice at night.”