AJ McKee is one of the brightest, and in some peoples minds, the brightest young prospect in the sport today. 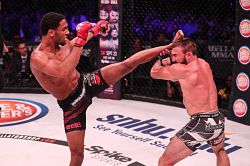 Who he fights depends on who wins between champion Patricio ‘Pitbull’ Freire and Emmanuel Sanchez, a rematch from their 2018 title fight. ‘Pitbull’ defeated Sanchez via unanimous decision (48-46, 48-47, 48-47) then, and Sanchez has only gotten better since.

AJ McKee will fight the winner of that bout, and most likely be sidelined until the winner is healthy enough to book their fight with him. Let’s take a look at what McKee has done thus far in his flawless career.

He started out his career with Bellator, and he’s had all 17 of his professional fights here. McKee went 7-1 as an amateur before turning professional, and he racked up a 5-0 record with Bellator in just 16 months. 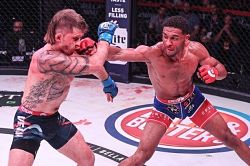 All five of those victories came via finish, before he won three of his next four fights via unanimous decision. Once he was 10-0, he finally got a name. It’s not like he was facing bums early on, most of his opponents were more experienced than him, and they all had not just winning, but good records. They just weren’t names.

Justin Lawrence isn’t a huge name, but he is an incredibly skilled talent, and everyone thought of him to be the next big thing when he was on The Ultimate Fighter 15.

He was just 21-years-old with a 3-0 record at the time he went on TUF, but he’s a multiple-time kickboxing champion with over 150 amateur wins, and he had a great deal of success in wrestling and boxing as well. He knocked James Krause out cold to get into the TUF house if that tells you how talented this young man was. 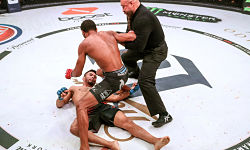 Next came the opening round of the gran prix, where he KO’d former WSOF Featherweight Champion Georgi Karakhanyan just eight seconds into round one.

McKee then submitted (armbar) Derek Campos 68 seconds into round three of their quarterfinal match up, before facing former Bellator Bantamweight Champion Darrion Caldwell in his last outing.

Caldwell got the takedown early in round one, but McKee was ready for it. He pulled off one of the weirdest, unusual, yet most effective submissions any of us will ever see. Most of us hadn’t seen in before, it’s a type of neck crack he likes to call the McKeeotine. That’s a pretty fitting name.

At this point, McKee has a perfect 17-0 record with 12 finishes, he’s now defeated three world champions, and if he wins his next fight, he’ll have defeated four of them, and be one himself.

His father, Antonio McKee, really groomed him into the perfect fighter. Antonio was a good fighter himself, finishing his career off with a record of 29-6-2, being a two-time MFC Lightweight Champion. 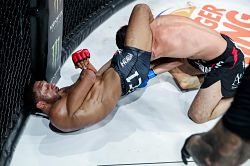 Antonio came back last year to compete on the same card as his son, and they both scored knockout victories. Antonio’s was a TKO that came in round two, and AJ knocked out Karakhanyan that night.

AJ has gotten a wealth of mixed martial arts knowledge from a very young age, and it shows. He’s an incredible athlete, he’s so well rounded, he can really do it all. It’s insane that submission he pulled off against Caldwell, he knew he was probably going to get taken down and he planned for it.

He’s a smart student, and a smart fighter. He’s also as well rounded as they come. He has knockout power in both hands and legs, and he’s very savvy on the mat. McKee’s a tough out for anybody.

We assume ‘Pitbull’ will defeat Sanchez again, considering he’s already done it before and he’s one of the best fighters on the planet. We cannot count Sanchez out though, the improvements he’s made are something only one of the elites can do.

Who does AJ McKee end up facing in the finals, and how does it go?

By Alex Behunin 21 hours ago

Who Is The Greatest MMA Fighter Of All Time?

Five Fights That Could Steal The Show At BRAVE CF 55

By Mike Wright 1 week ago