The Natural showcased a focus on The Problem Child via his personal IG story recently. Holzken posted a photo of Paul overtop a fallen Woodley with the text saying “Easy work with a wrestler. Try it with me @JakePaul.” 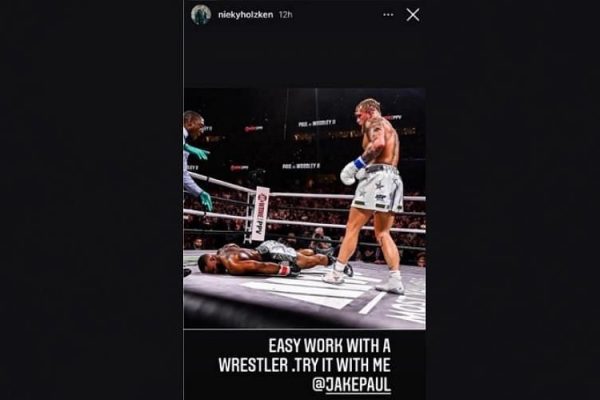 The Youtuber turned prizefighter has been receiving many callouts from seemingly all parts of the combat sports landscape. That apparently includes ONE Championship fighters as well.

While well regarded in the Kickboxing and Muay Thai ranks, Holzken does have professional boxing experience as well.

If this Paul fight ever came together, he would be the only opponent of the social media disruptor’s boxing career who actually has recorded a professional boxing win.

Holzken has an overall pro boxing record of 14-1 with 11 stoppages and has a regional super middleweight title on his resume. He last competed under Queensberry rules in April 2018 when Nieky Holzken secured a third-round TKO over journeyman Bernard Donfack.

The warrior out of The Netherlands has fought sweet science combatants the caliber of former unified super middleweight world champion Callum Smith. This is Holzken’s lone boxing loss which came via unanimous decision after twelve rounds of testing skills.

Nowadays Holzken is a fixture on the ONE Super Series circuit. Normally competing in either kickboxing or in Muay Thai with four-ounce gloves under the ONE Championship banner.

The former Glory welterweight champion and former ONE lightweight world champion would certainly resemble a massive step up in competition for the Showtime pay per view attraction.

The former emerged victorious over the latter in the recent Paul vs Woodley II clash. That bout went down on December 18th in Tampa, Florida.

Paul is now 5-0 overall in the sweet science and his four stoppage victories have seen him halt every opponent he has ever stepped in the ring with.

What are your feelings on a possible boxing bout between Nieky Holzken and Jake Paul?

By Chinyere Okafor 19 hours ago