Last night, New Orleans native Regis Prograis knocked out Jose Zepeda in the 11th round to capture the WBC World Super Lightweight title and become a two-time World Champion. Prograis fought off the ring rust after a longer than normal layoff and brought the title home from a tough Zepeda. So today, we’re looking back at that fight and seeing how it all went down in today’s issue of Aftermath!

Jose Zepeda has been in an abundance of wars. These wars take something out of you.  Often enough for Zepeda he has risen to the occasion and given a good account of himself. His fight of the year candidate with Ivan Baranchyk saw Zepeda knocked down several times only to get back up and answer with the finish after trying and trying again to put Baranchyk down. Unfortunately for Jose Zepeda, this was not his night, and he had no answer for the slick head movement and jab from Regis Prograis.

While Zepeda and Prograis both struggled to get the ring rust off in the first round, it was almost exclusively Prograis’ fight from the second round on. Zepeda struggled to do anything with the jab and conceded ring control to Prograis for the whole fight.

Prograis is a heavy hitter, as we all know. Out of his 28 wins, 24 have come by way of knockout if we are including Zepeda from last night. We saw in the Josh Taylor fight that to beat Prograis, you cannot be scared of that power early on and you have to get in the ring and box with him. The longer a fighter lets Regis Prograis work, the wider the gas tank disparity becomes, the more he softens a fighter up, and the harder it is to finish him.

Jose Zepeda did exactly the opposite of that. He let Prograis work at range and gave the New Orleans champ too much respect. Jose Zepeda didn’t fight his fight. He was too respectful of Prograis and let Prograis take his time to get the finish.

Now Jose Zepeda has dropped his third shot at the World Title. One came by way of injury and the other was a close, close fight. Regis Prograis left no doubt that Zepeda wasn’t meant to finally become champion on the night.

Zepeda is now 33 years old, ancient in terms of a super lightweight. Having dropped a shot at the title thrice now, it’s hard to see where he goes from here. Aside from the odd tune up fight in a few years, it’s doubtful that Zepeda will ever have the chance to become World Champion and that really stinks for the California native. He’s put his time in and put on some fun fights. He’s got nothing to show for it legacy-wise.

But this last part of his career has been his, or his management’s, fault as he fought one round since mid-2021 coming into this fight. A fighter cannot expect to be in fighting shape without putting in the proper time. At a level of fighter like Regis Prograis, Josh Taylor, and Teofimo Lopez, Zepeda couldn’t have hoped to compete without getting the necessary rounds in. Pair that with the fact that Prograis is simply the better boxer, and you get a recipe for an 11th round knockout like we saw last night.

With is win and capturing of the WBC World Super Lightweight title, Regis Prograis has returned to the top of the division. There are some fantastic names waiting for Rougarou that can bring a big fat paycheck for Prograis. There’s the Josh Taylor rematch, Teofimo Lopez is on the rise at 140, and of course other names like Sandor Martin, Jack Catterall, Gary Anthanne Russell, Ryan Garcia, Jose Pedraza, Richard Commey, I can go on and on. Prograis winning the belt again just opens up options and will hopefully have Prograis more active going forward.

Jose Zepeda was a tough puzzle to crack for Prograis, as he said in his post-fight interview. But Prograis worked a game plan set for him almost flawlessly. He did allow himself to get in a dog fight with Zepeda who thrives there. But without that dog fight, Prograis might have gone on to win the decision. While getting in such style of fights isn’t advised, especially with what we’ve seen in the past from Zepeda, to take that away from Prograis would be untrue to what he really is as a fighter. 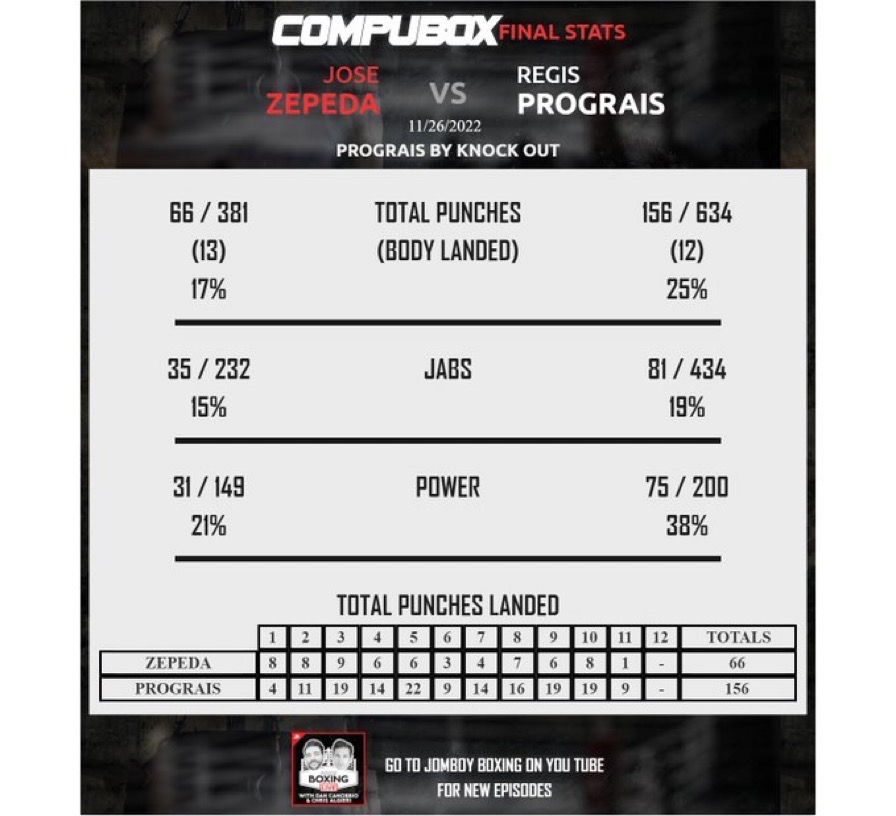 Very early in the fight we saw the game plan from Regis Prograis. Be defensively sound and stick Zepeda with the jab. While Prograis did get clipped later in the fight, he did well making Zepeda miss with the parry and his head movement. According to Compubox as you can see above, Prograis held Zepeda to a 17% connection rate. While he did keep his hands down which led to him getting hit and subsequently wobbled, he did show great head movement and to take away the style and pizzaz that Prograis brings would be to neuter him as a fighter.

Prograis also did great circling away from the power hand of Jose Zepeda for 98% of the fight. Aside from those couple dog fight moments, Prograis stifled Zepeda’s power shots.

Regardless of where he fights, boxing just got a lot more lucrative for Regis Prograis.

Speaking of stifling Zepeda, the jab was a thing of wonder for Regis Prograis. As Zepeda walked forward early, Prograis jabbed him with the jab and taking control of the center of the ring. Once Zepeda felt the power of Prograis, Prograis kept Zepeda on the back foot and bullied him around the ring. Once Zepeda felt cornered and that he needed a finish, that’s where Prograis started to punish his opponent.

The finish was a culmination of all the work put in by Regis Prograis on the night. After softening up Zepeda with the jab, keeping him on the back foot tiring him out, and landing the jab and the cross, Prograis put his foot on the gas and got Zepeda out of the ring.

In my series Layers, a career look on Vasyl Lomachenko, we often speak of the outside foot advantage and how Lomachenko uses that in conjunction with the pivot to create the outside angle. For Regis Prograis and Jose Zepeda, a southpaw versus southpaw matchup, we got to see Prograis utilize the inside angle.

In figure 1 above, we see how Prograis sets up the inside angle and line up the cross magnificently. (1 & 2) To set up the finish, Prograis starts shifting to his right. With the bladed stance, Prograis has his power hand slightly off-center line and uses the shift to line up the power punch for max power. As it lines up, (3) Zepeda doesn’t follow Prograis and stands there looking to exchange. As the left centers up, Prograis lands it and snaps Zepeda’s head, setting up his finish.

(4) In an alternative angle, we can better see he footwork of Prograis and how he sets up the cross. First he steps in with his rear foot with small steps to keep his power base. Bringing his rear leg forward is sneakier than leading with his lead foot and better hidden from Zepeda. When he steps in with the rear foot, he’s angling to his right. He then (5) steps in with his lead foot and gets in the pocket with Zepeda while blinding him with the jab. Now Zepeda is in brawl mode but not quite in position to do so effectively, giving Regis Prograis the advantage. (6) Prograis has lined the cross up perfectly and (7) lands it with devastating effect.

Of course, Prograis would pour it on Zepeda and not let him off the hook. One thing Prograis does well is that he knows when to and when not to let his hurt opponents off the hook. It was this sequence in the 11th that Prograis saw fit to finally get Zepeda out of there with him.

Going forward, I’d like to see Prograis be a little more sound on the defensive front. His head movement is great, and he slips and dips quite well. He stays sound with his footwork as well. But keeping his hands down against a fighter with better hand speed, think Ryan Garcia and Teofimo Lopez who are smaller and come up from the weight class below, could end in disaster for Prograis. I’m not saying adopt a high guard but maybe a little more textbook stuff from Prograis could be in order.

One thing is for certain, Regis Prograis may have some big fights coming in the future, but he can’t afford to take a victory lap like Lopez did after he beat Lomachenko and take upwards to a year off. Doing that saw Teofimo Lopez beat and ousted from lightweight by George Kambosos Jr. I say bring a title fight home to New Orleans like Muhammad Ali did I his rematch with Leon Spinks at the Superdome in 1978. Regardless of where he fights, boxing just got a lot more lucrative for Regis Prograis.