Former interim UFC Welterweight Champion Colby Covington picked up another incredibly dominant performance this past weekend at UFC Vegas 11, as he defeated Tyron Woodley via TKO (injury) at 1:19 of round five.

He broke a personal best record in this fight, landing 232 total strikes, as he also became the only man to finish Woodley in the UFC. Covington had the perfect gameplan; take Woodley down when possible, but more so than anything, grind him up against the cage for the first three rounds. 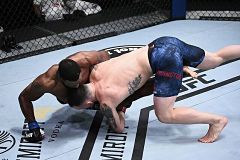 Once he did that, Woodley started fatiguing, and Covington really started pouring it on in round four.

Rounds one through three were easy 10-9’s for Covington, round four was a 10-8, and it looked like round five may be too, until Woodley’s rib popped.

Covington hasn’t ever really ran into any resistance in his career, aside from earlier on against Warlley Alves, and in his second-to-last fight against Kamaru Usman. 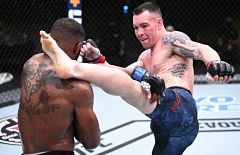 Covington was just 8-0 going into his fight with Alves, had a broken rib, and just rushed the takedown, thus the reason he was caught in a guillotine choke.

He’s much more methodical now. Then against Usman, he’s the only man to ever win a round against Usman, and he was arguably up 3-1 going into round five.

Usman is one of the most dominant fighters out there, and Covington gave him all he could handle. Jorge Masvidal may have won round one against Usman, but it’s arguable. Covington clearly won two, if not three rounds against him.

After his dominant performance last weekend over a former UFC Welterweight Champion, what’s next for Colby Covington? He did just pass Gilbert Burns in the welterweight rankings, landing himself at No. 1. Burns is fighting Usman for the title in December. Perhaps he gets the winner of that fight?

A rematch with Usman would be great to see, they had such a close, competitive, back-and-forth war the first time around. It’d be interesting to see what each of their gameplan’s would be this time around. 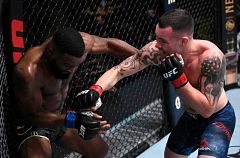 A fight with Burns would also be very entertaining, and also hard to predict. They’re both about as dominant and well rounded as they come, but in very different ways.

The No. 4 ranked Leon Edwards is still looking for a fight, 14 months after his last, which was a unanimous decision victory over Rafael dos Anjos.

He and Covington would make a good No. 1 contender fight. Edwards has won eight straight fights, he needs to be given someone.

Lastly is a fight with former teammate Jorge Masvidal. These two used to be best friends, they were each others main training partner for years and years, then about a year ago things went south between the two. It got to the point where even Covington’s teammates didn’t fancy his gimmick, and he had to leave the gym considering.

Now Covington’s at MMA Masters, and he had a great first fight under his new banner. Often times, when a fighter switches camps and coaches, especially when they’ve only ever trained at one gym, they aren’t the same anymore. That wasn’t the case with Covington, he came out and looked as good as he ever had. 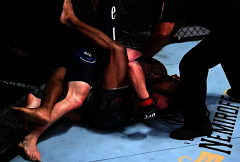 This opens the doorway to Covington versus Masvidal, perhaps the best 170 lb fight to make right now.

They’re both dangerous match ups for one another. Masvidal, though he has incredible wrestling defense, he has often times been out-paced by elite wrestlers.

Covington is absolutely an elite wrestler, being an NJCAA National Champion, an NCAA Division I All-American, and a two-time Pac 10 Champion.

That’s not to say he could just take Masvidal down and keep him there, that’s very doubtful. 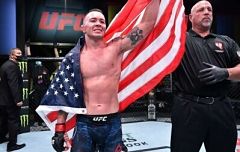 As Masvidal showed us in the Ben Askren fight, just because he’s fighting an elite wrestler, doesn’t mean he’ll lose.

He has a lot of dangerous tools to work with. However, Covington is far more well rounded than Askren, and he knows Masvidal’s game as well as anyone in the sport.

The same goes for Masvidal knowing Covington’s game better than anyone in the sport as well. Covington could make it look like Masvidal’s fight with Usman and just grind him against the fence, but would Masvidal be able to circle out and get back to the center? Probably, at least at some points.

If it stayed on the feet and Covington couldn’t tie up with him, it’d be a very tough night, Masvidal’s one of the best and most dangerous strikers in the game. Covington’s 1-0 against former teammates thus far, would he make that 2-0 in a fight against Masvidal?

What’s next for Colby ‘Chaos’ Covington?