Ricky Simon just put on as dominant of a performance as he’s had to date on Saturday at UFC 258, and that’s saying something because he’s a dominant force as it is.

What made it more impressive is who he did it against, Brian Kelleher, who’s a solid talent that really can do it all.

Kelleher’s record doesn’t reflect how good of a fighter he is; he has great submissions, he even submitted Iuri Alcantara in his UFC debut. He has power in both hands, he can switch stances while throwing strikes, and his kicks of all sorts are very finely tuned as well. 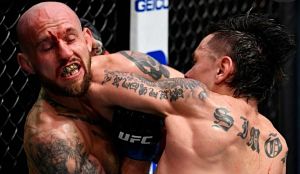 Simon used his pressure, along with his wrestling and boxing to overwhelm Kelleher from bell to bell, he just doesn’t stop coming forward. Simon’s guillotine defense and spins in the wrestling really showed up in this fight.

He didn’t have a number next to his name coming into this bout, which was honestly quite surprising.

It’s a wonder whether he’ll be a ranked contender this coming week or not. Simon’s even the last man to defeat No. 12 Merab Dvalishvili, and did so by submitting (guillotine choke) him at the end of round three.

After starting out his UFC tenure going 3-0 in the promotion, improving his professional record to 15-1 in the process, Simon then fell short in his next two outings against the returning former WEC featherweight champion Urijah Faber (TKO) and Rob Font (UD). 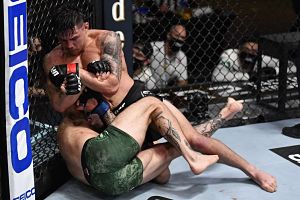 After improving his professional record to 18-3 by absolutely mauling Brian Kelleher, what’s next for Ricky Simon? One thing’s for certain, he deserves a ranked opponent next.

If Simon doesn’t get a ranked opponent next, who better for him to face than Raoni Barcelos? This Brazilian talent is an incredible boxer, he’s a national champion in Brazilian Jiu-Jitsu, and he was also on the national wrestling team.

Barcelos needs an opponent for February 27, as Raphael Assuncao withdrew from the bout not too long ago. He just improved his professional record to 16-1 in November, and has gone 5-0 thus far in the UFC. 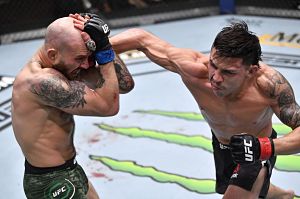 If Simon does get a ranked opponent next, which he deserves, No. 13 ranked Cody Stamann would be a good test for him. Stamann was expected to compete last weekend at UFC Vegas 18 against debuting Askar Askar, but the fight was cancelled the day of due to Askar not being medically cleared by the UFC.

No. 9 ranked Jimmie Rivera was also expected to face No. 8 ranked Pedro Munhoz on Saturday at UFC 258, but the bout was scrapped for undisclosed reasons. If the UFC ends up putting that match up back together, the winner of that fight would be a good test for Simon.

If the UFC doesn’t end up putting the fight back together, either of them would make for a great match up.

Standing 5’6” with a reach of 69”, along with his tenacious wrestling and solid boxing, Simon is going to be a tough go for just about anyone at this point. Especially with him having just turned 28-years-old in August, we’ll be seeing the best of this kid for at least four years to come.