Taylor “Surtees” Pierce is a name that’s been active in the regional fight scene sneaking up on a decade, now. He’s been active as an amateur since 2011, is currently riding a 5 fight winning streak and after methodically taking his time to build his arsenal, craft, and name, Pierce’s momentum is soaring through the roof to make his professional debut. This Saturday, September 28th at the 2300 Arena in Philadelphia, PA. Taylor “Surtees” Taylor transitions into the professional rankings at Art of War 13.

Standing across from him on fight night will be Martinez BJJ well-rounded stud, Matt “White Chocolate” Turnbull. Both of these fighters started competing roughly around the same time as amateurs (Pierce’s 2011 ammy debut to Turnbull’s 2012 ammy debut). Although, Pierce took a ltad longer to make the step into the professional rankings, as Turnbull sits currently at 1-2 and is coming off of a decision loss.

This bout is already being talked up as potential fight of the night as these two athletes are so well matched, Pierce claims “It’s good timing for both of us. And I feel like we match up well.”

Touching on Turnbull’s particular skill set, Pierce makes no quarrel with stating “I feel like I’m better everywhere than he is.” While reluctantly giving a bold prediction showing his utmost respect for not only Turnbull, but Martinez BJJ as a whole. When pressed for a prediction, however, Pierce confidently exclaims, “Victory dude…”

Tune in above as Taylor “SURTEES” Pierce delves into a matchup that could very well steal the show, against Matt “White Chocolate” Turnbull at Art of War 13 coming at you live from the 2300 Arena in Philadelphia, PA. in just a few days.

For tickets, please contact Taylor personally to show support for your local fighter or visit https://2300arena.showare.com/ordertickets.asp?p=289 as they’re going fast and you don’t want to miss this sure to sell out show! 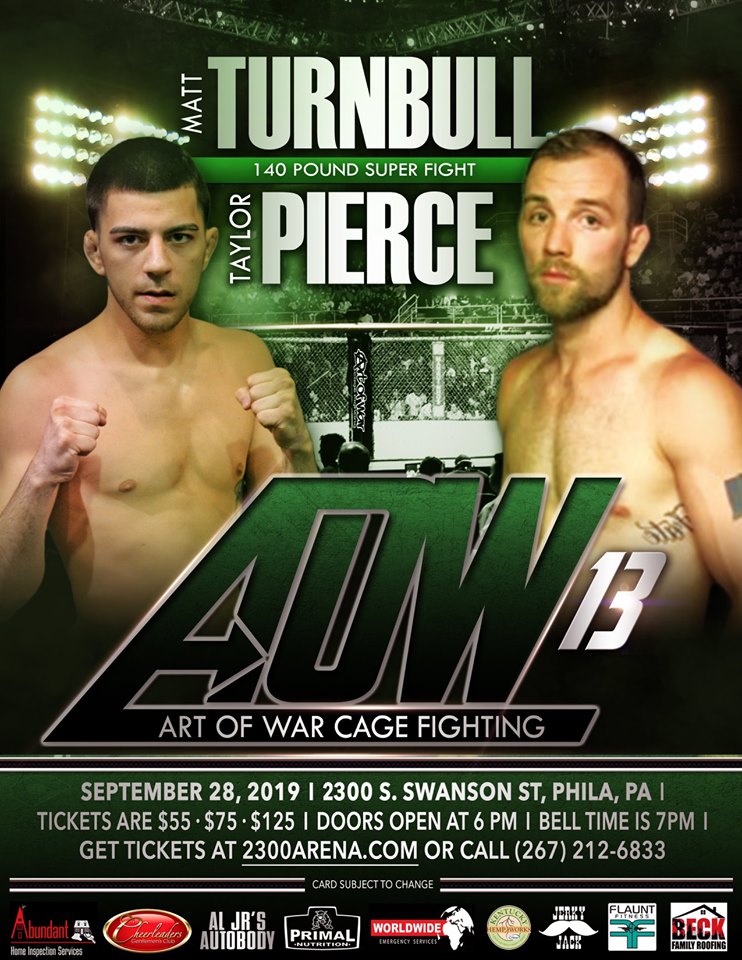