We were supposed to see these two clash back in December of last year, but Ortega was forced out of the bout with a knee injury, and was replaced by Frankie Edgar. Now we get to see them this Saturday live on ESPN+! 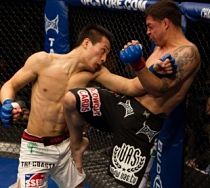 We’ve known who ‘The Korean Zombie’ was since his 2010 train wreck of a fight with Leonard Garcia at WEC 48, but including that fight, we’ve only seen him compete ten times. We have however seen him have some really stellar performances in those ten fights.

After going 0-2 in the WEC, Jung quickly took action once putting the UFC gloves on, as he went 3-0 with three finishes, which ultimately awarded him a title shot.

His wins were over Leonard Garcia in their rematch, who he submitted (twister) at 4:59 of round two, becoming the first man to pull off a twister submission in the UFC.

Bryce Mitchell is the only man that’s done it since (Dec 2019), and weirdly enough, he’s also in the 145 lb division. Jung then fought Mark Hominick, who was fresh off his title fight against Jose Aldo. This was a very interesting match up we were all very excited to see. 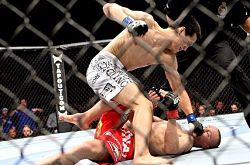 Jung made the comment that his striking is better than Hominick’s, and considering they’re both professional kickboxers, with Hominick going 21-0 in the sport and Jung going 15-6, it made the fight that much more intriguing.

This fight only lasted seven seconds however, as Hominick came out and immediately threw a check left hook, where Jung countered with a vicious overhand right and followed it up with some ground-and-pound for the fastest knockout finish in ZUFFA featherweight history, beating Jose Aldo’s eight second knockout of Cub Swanson. 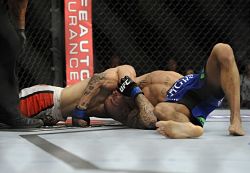 This got him a main event bout with Dustin Poirier, and he did not disappoint. After having a war throughout the first three rounds, Jung locked up a D’Arce choke on Poirier, and it was a wrap, as he got the tap at 1:07 of round four.

This set him up for a title shot against Jose Aldo, where he was injured and finished in round four. This was in August of 2013, and we wouldn’t see Jung again until February of 2017.

In Korea, if you choose not to go into the military during your adolescent years, you must go before turning 28-years-old. Jung was forced to perform his patriotic duty, and was out three-and-a-half years considering. 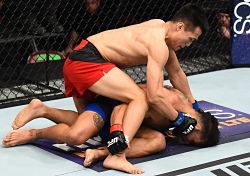 It’s even more unfortunate when you know they only have to serve two years, and he was still out that long.

Same thing happened with UFC bantamweight prospect Kyung Ho Kang, who, like Jung, had to go into the military in the middle of his mixed martial arts career, and he was out nearly four years as well.

Upon returning, Jung knocked out Dennis Bermudez at 2:49 of round one, before taking another extended break. This time he was out nearly two years, as we didn’t see him again until November of 2018, where he was knocked out by Yair Rodriguez. 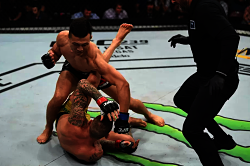 Though that was one of the best knockouts in MMA history, and always will be, it’s unfortunate Jung ran right in on Rodriguez like that in the last five seconds of a five-round fight. Most people believed he won three, or four rounds of that fight, and all three judges tallied it for him.

Nonetheless, he’d come back about seven months later to TKO Renato Moicano in just 58 seconds, before doing the same to Frankie Edgar, who he TKO’d at 3:18 of round one.

This brings us up to date in his career, but unfortunately, he’s missed another ten months in between his fight with Edgar and his fight this weekend with Ortega. 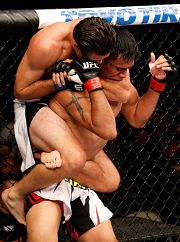 ‘T-City’ is one of the most promising talents we have in all of MMA, and has been for some time now. He, like Jung, hasn’t fought in some time. It’s actually been 22 months since we last saw him, where he was stopped at the end of round four of his title fight with Max Holloway.

Up until then, he was undefeated, and his career was filled with fun back-and-forth wars that he somehow managed to get the finish in before the final bell. Ortega debuted in the UFC with an 8-0 record, four of those wins coming via submission, and four coming via decision. 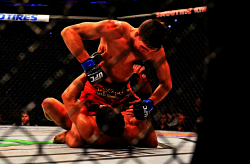 His first fight in the UFC saw him immediately take his opponents back and get the submission (rear naked choke) victory at 1:39 of round one, though it was overturned to a no contest when he tested positive for a banned substance.

After spending a year away from the cage due to his suspension, Ortega had a straight up war against longtime UFC veteran Thiago Tavares, who he eventually TKO’d at 4:10 of round three. If you haven’t see this fight, go back and watch it, this is one of the best fights you’ll ever see. 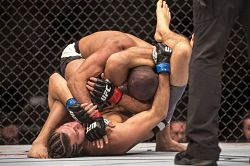 His next fight was one of his most impressive, where he defeated The Ultimate Fighter 14 winner Diego Brandao.

What was so impressive about this is the fact that Brandao’s a 2nd-degree black belt in Brazilian Jiu-Jitsu, and Ortega chambered submission after submission until Brandao was eventually locked in a triangle choke, and was finished at 1:37 of round three.

‘T-City’ first locked up an anaconda choke, then stepped over and turned it into a mounted guillotine, before wrapping up the triangle and rolling to his back.

To do that to an incredibly high level BJJ black belt, it’s one of, if not the most beautiful submission finish you’ll see in this sport. Wonder why he’s called ‘T-City’? The T stands for triangle, as that’s his favorite submission.

Next came a fight with another longtime UFC veteran in Clay Guida, who he also had a very back-and-forth fight with. 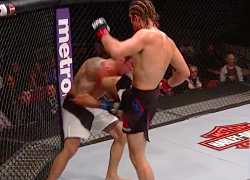 This decision would have been very close, but Ortega landed a perfectly timed and placed knee right to Guida’s chin when the fight was 20 seconds away from ending, and it was a wrap.

Ortega defeated Guida via KO at 4:40 of round three, becoming just the second man to knock him out, the first being Chad Mendes.

He then fought Renato Moicano, and again, this would have been a very close decision, but Moicano ended up shooting on a takedown and was immediately wrapped up in a guillotine choke. Ortega got the tap at 2:59 of round three. 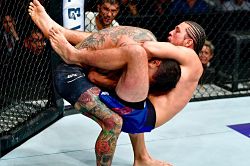 ‘T-City’ followed this up with a second-round submission (guillotine choke) of another Brazilian Jiu-Jitsu black belt in Cub Swanson, before becoming the first man to ever finish Frankie Edgar with strikes.

This was the one that really blew everyone away, as if the Brandao finish didn’t already, because we’ve all seen the wars Edgar has survived, and won, and this grappler KO’d him in round one.

Ortega then had his fight with then champion Max Holloway, and really, he disappeared from the mixed martial arts world since until now, aside from his brief booking with Jung last December.

One good thing did come of his fight with Holloway. Aside from it being a great fight that entertained us all, it was a showcase of how tough Ortega is. The fact that he ate 307 total strikes, 244 of which were to his head, through 20 minutes of fighting, and he didn’t even drop once, he’s as tough as they come. That’s something he’ll need spades of in this fight, toughness. 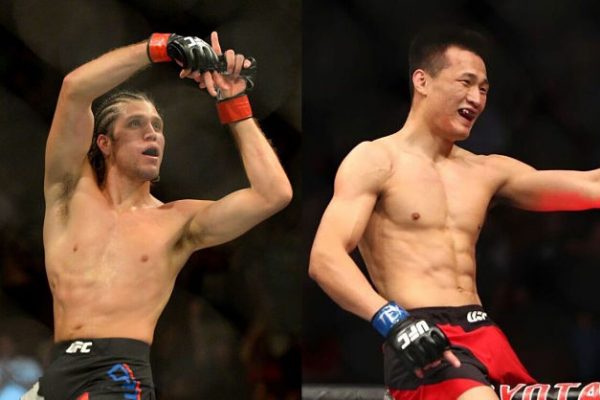 There are so many things to consider when breaking down this fight, or predicting a winner. Firstly, it’s nearly impossible to predict how this fight will go, they’re both so good in so many areas. Of course, you have a 50-50 chance of being right, but if these two fought ten times, one would probably win five or six and the other would win four or five. They’re very closely contested.

These top contenders have two common opponents, Renato Moicano and Frankie Edgar, both of which defeated, and finished them both.

Interestingly enough, they’re the only two fighters to have knockout wins over Frankie Edgar.

The fact that guys like Chad Mendes, Jose Aldo (two times), BJ Penn (three times), Gray Maynard in their second and third fights, Cub Swanson (twice), or Jeremy Stephens couldn’t knock Edgar out, but these two could. It’s quite remarkable.

Jung has always had wicked hands with good kicks to go along with it, and a very good ground game.

Ortega on the other hand has always had the highest level grappling in the sport, and he now within the last four years or so has added some good striking to go along with it.

The power Jung possesses, along with his shot selection and accuracy, he’s one of the most entertaining strikers to watch in the entire sport, and he’s also one of the most dangerous. His punches are always so crisp and perfectly thrown.

‘The Korean Zombie’ doesn’t always make the best choices, as he showed us in his Rodriguez fight. It does however appear he’s tightened that up, because he’s been very cerebral lately, fixing the mistakes he’s made before, kind of like Justin Gaethje.

We don’t yet know if we can say the same for Ortega yet, we’d never seen him lose, and we haven’t seen him since. He did however state that he got to the very top of his division off “jack in the box”, a term he used for not doing everything the right way, primarily his diet and training regimen.

This is literally one of the best match ups ever, it really is. This is such a high level fight, and honestly, it’s unfortunate one of them has to lose.

This is a very important match up for the division as well. Whoever wins this may very well be next in line for a crack at Alexander Volkanovski’s title.

Both men stand 5’8”, but Jung will have a three inch reach advantage, having a 72” wingspan as opposed to Ortega’s being 69”. Ortega has a 1st-degree black belt in Brazilian Jiu-Jitsu under Rener Gracie, that’s going to be the most important thing for Jung to avoid, grappling with ‘T-City’ at all costs.

Though ‘The Korean Zombie’ does have some very, very solid grappling of his own, boasting a Brazilian Jiu-Jitsu brown belt with eight of his wins coming via submission, there are levels to it.

Ortega doesn’t even need his opponents to make a mistake, he creates his own opportunities, and he locks his submissions up so quickly, there’s just no escape once they’re locked into it.

Along with a BJJ brown belt, Jung also has black belts in Judo, Hapkido, and Taekwondo. Perhaps that’s the reason his striking is so well rounded and lethal, as well as his grappling. Two black belts in striking arts, professional kickboxing experience, as well as a black belt and a brown belt in ground fighting arts.

This is going to be a good one! Tune in this Saturday to see who the rightful No. 1 contender is, we know these two won’t disappoint.

Who do you see winning this classic match up of top five featherweights?