Chris Gutierrez has been making some waves in the UFC’s bantamweight division since arriving in November of 2018 with a record of 12-3-1. Gutierrez would lose his promotional debut to Raoni Barcelos via submission (rear naked choke) in round two, someone who still has yet to lose in the UFC, and he hasn’t lost since. 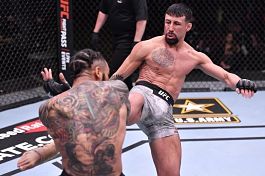 As you see, he already had some good names on his resume before even coming over to the big show, and since losing to Barcelos, Gutierrez has gone 4-0-1 inside the UFC octagon over the last two years.

One thing that really stands out in Gutierrez’ fights is his diversity of kicks.

Not only his diversity of them, but especially the effectiveness he has with his leg kicks. If you watched his fight with Ewell, you’d see Ewell is good at defending leg kicks, but Gutierrez continued finding a home for them one way or another.

It was remarkable, the way Ewell would switch stances, how Ewell would be completely out of position for a leg kick attack, and Gutierrez would still somehow land one, or two, or three. He was absolutely relentless with them more and more as the fight went on. 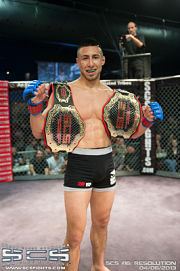 Gutierrez also finished promising talent Vince Morales with leg kicks toward the end of round two back in May of 2020. And believe it or not, that’s also how he defeated Jimmy Flick, doing so midway through round three.

At this point, Gutierrez has fought for Bellator, WSOF, LFA, and the UFC. He’s picked up victories in all four promotions, he’s a former SCS & WFC bantamweight champion, and he’s already gone five rounds.

After improving his record to 16-4-1 with this dominant victory over Andre Ewell, what’s next for Chris Gutierrez?

Adrian Yanez, should he defeat Gustavo Lopez at UFC Vegas 22, would be a great match up for both men. Yanez just made his UFC debut on Halloween against Victor Rodriguez and walked away the victory via first round KO (head kick). His striking, like Gutierrez’, is at a very high level. 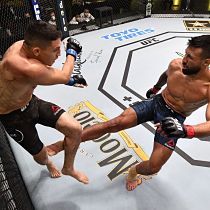 Louis Smolka would also be a good match up to see Gutierrez in. Smolka returned to the UFC in November of 2018, just six days before Gutierrez made his promotional debut, with a second-round armbar victory over Su Mudaerji.

Smolka initially went 5-1 inside the octagon, improving his professional record to 11-1, only losing a split decision to future title challenger Chris Cariaso. Following these six bouts, Smolka lost his next four-straight and was released from the promotion.

Smolka went on a three-fight finish streak following this, winning the CXF flyweight championship in the process, and is now back in the UFC, coming off a second-round TKO victory over Jose Alberto Quinonez in December. 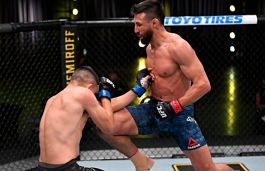 Lastly, is the winner of Randy Costa versus Trevin Jones, which is going down at UFC 259. Costa has looked incredible thus far into his UFC career, using his very fun-to-watch, yet devastating striking, and Jones is coming off his TKO victory over the 16-2 Timur Valiev.

Of course, that victory was overturned due to Jones testing positive for marijuana, but that’s neither here nor there. He got his hand raised at the end of that fight.

At 29-years-old, Gutierrez is comfortably approaching the peak of his abilities, and it’s been very exciting to see. He really is an expert level striker, he controls every fight he’s in with it. It’ll be interesting to see how well his kicking game works against the elite of the division.